Research spike to explore the technical details of the Vue,js framework as it relates to the current architecture of VE. The outcome is to identify opportunities, risks, and areas for further exploration.

Due August 15: Draft migration plan circulated to team for feedback

I'm unsure if it's applicable but we're trying to build on the lessons learned from OOUI whenever building new Vue.js components. If it's useful, please consider contributing to this more general OOUI migration guide draft with your insights and corrections. Mistakes are my own but I've been trying to identify the typical procedure developers should follow when building a new component that has an OOUI counterpart. It's meant to be a practical approach and my thinking is that the more OOUI experts can help guide the migration, the less work they'll have to do themselves.

Top-level wrapper component seems practical, following general Vue external-library techniques. I.e. include all the external stuff separately, and just create a wrapper to anchor it to your Vue component tree via mounted/beforeDestroy hooks.

Model binding seems like a poor fit for VE's behavior. With just VE core and having HTML as the data, it's not awful, though it still causes selection issues due to replacing the document. VE-MW has an entire async API wikitext transform required in-between, though, which gets awkward.

It seems not unreasonable to just expose some getter/setter methods on such a component, and anything using it can accept that it's not a perfect vue data-exposing component.

Here's an example of such an implementation, which will put VE core onto a page while relying on all sorts of globals: https://github.com/kemayo/vue-visualeditor-example/blob/master/src/components/VisualEditor.vue

(This is the approximate level of VE implementation we have on our minimal demo.)

Further detail (from discussing with @DLynch): it's not clear what document data a top-level wrapper could usefully expose as a Vue-style reactive property.

It seems in all these cases, it is in fact less confusing for the caller to call a function explicitly: that function can then return a promise or throw an exception as appropriate, and there's no false impression that data is being exposed according to the normal Vue conventions.

In case it helps, https://github.com/wikimedia/mediawiki-extensions-ContentTranslation/tree/master/app/src/plugins/ve is the source code of Section translation's VE integration using Vue 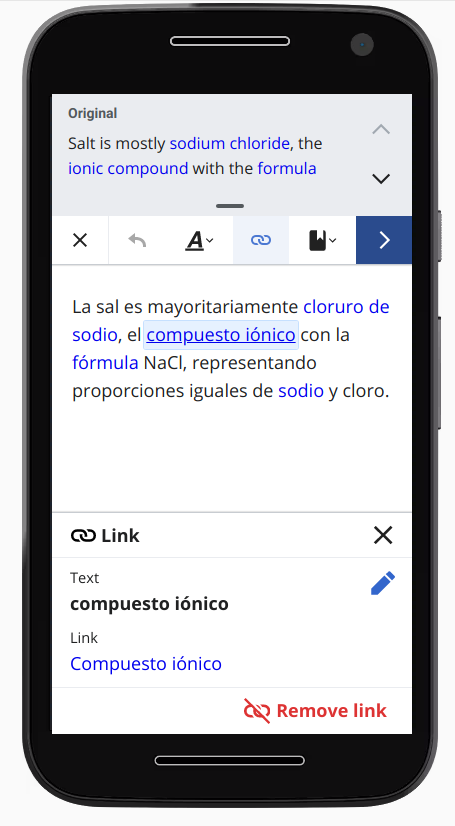 @DLynch + @dchan, before I mark this task as resolved, can y'all please add links to the artifacts you created as part of this research in the task description?

I'm coming late to this task, but I think that @santhosh's wrapper component is a good example of how to integrate a stand-alone 3rd party widget like VE into a Vue application as simply as possible (still relying on the underlying VE behavior, etc).

If you wanted a deeper integration where the text being edited existed in the reactive data of your component, but still needed to parse Wikitext, you might want to look into watchers. From the docs page: "This is most useful when you want to perform asynchronous or expensive operations in response to changing data" – a (debounced) watcher function could listen for changes in the source text and then hit the parsoid service to get new HTML output while the user types.