User Story:: As a user, I want to see problems with my input so I can correct them
Context of use: The user would be on the mobile banner and tries to enter interval, amount and/or payment method.

Current Problems: Currently, errors are shown via javascript alert()s. This does not map visually with where the problem is, is inconsistent with the desktop banner and the donation page and might be perceived as disruptive, too.

Possible Solution: The UX team suggests to use the same behavior across mobile, desktop and donation page. Thus… 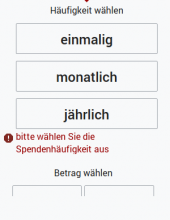 @Jan_Dittrich Thank you for this. There are quite a lot of payment type options, that might use up more space than visible an some smaller screens:

Do you have a solution for that?

We could always put the error on top of the options, thus anything relevant that comes after the error is in the normal scroll direction and e.g. "5€ per SMS" might be not visible initially, but can be quickly scrolled into view.