Assigned To
Authored By
Tags
Subscribers
View All 15 Subscribers

At its core the Underlying Goal of This Project is to incorporate the concept of Gamification into the Commons Android Application with the purpose of leveraging User’s interest to increase their Wikimedia edit count. This project aims to realise such kind of Gamification by establishing a Leaderboards for the users wherein they will be ranked based on their edit count via the Commons-App and not the Web portal.The app already implements the level system which can be combined with their ranks (indicative of their edits) and based on that we can award them Rank Badges/Titles whose distribution algorithm has been proposed in detail in this proposal later.

The API hosting server can run certain services for periodic rank re-calculation, these services can be implemented using the Advanced Python Scheduler ( APScheduler ) or we can also use Python Crontab.

The commons applications provides public logs of the users which when displayed with conditions type=upload and with tag filter=android app edit we only get the uploads made by the android app as can be seen here .
The API would implement this as follows:

These are counted when images are uploaded while in
Nearby section so they are automatically from the mobile
app.

These are calculated from the globalimageslinked table under the GlobalUsage extension, to sum it up:

For badge distribution we combine user’s rank ( monthly/weekly rank, could be based on uploads ) with their achievements so as to incorporate long term (the level) and shortterm (weekly/monthly rank) so we define a quantity x whose formula has been described below and we find its standard deviation and the badges are distributed as per the Badge distribution diagram(diagram in pdf) . 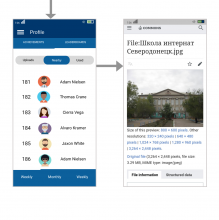 The Design Screens shown above demonstrate the flow of the app in the leaderboards section, the last screen shows the user screen when the user has clicked on one of the leaderboard position holders, this first opens the commons gallery page of that particular user from where users can open any of the uploaded images (this is exactly what has been shown in the last screen, one of the gallery pictures )

An Overview of how the crud operations will work has been drawn below
For Evaluating uploads of Single user: 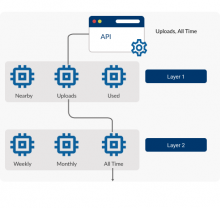 The Leaderboards will be processed in two layers as shown above:

The uploads will be derived from joined logging and change_tag tables now we will also have the timestamp in the combined result records, in all the cases (Nearby/Uploads/Used). These results are calculated on the basis of the logic discussed under the heading Rank Calculation.

In all the three cases (Nearby/Uploads/Used) the final record list will have timestamp (log_timestamp) now this timestamp will be used to filter the leaderboard results as follows:

Where WeekDuration is the difference between two
timestamps with one week gap.

The first two Layers will be repeated for every user and for all the (3*3) 9 cases we will store the corresponding fields of the edits_commons_app table.
After the completion of all the three layers we will have a complete leaderboard record of a particular user, this will be repeated for every user. The Rank Badge calculation kicks in at this point, from the algorithm it might seem like the process would be highly taxing for the server but actually it's quite straight-forward. The 9 final ranks per record in the edits_commons_app table leveraged into the standard deviation formula mentioned in the Badge Calculation section.

Community Bonding, 4th May - 1st June
● Get to know the Community more, and bond with mentors, admins and developers.
● Get feedback if something in the project needs amendment.
● Finalize the Database Schema and APIs.
● Read more about RxJava, APScheduler and other relevant android technologies and concepts.
● Get familiar with Commons database schema and ideate on how it will implement the new tables proposed in the project
● Finalise a barebones implementation of the ui using viewpage and recyclerView in the Achievements activity
● Deliverables:
○ Report on Community
Bonding period

● Implement basic view pager
● Get approval on database schema changes and gather necessary knowledge on how to implement it.

Week 5
Debug the database and Layer 1 API changes, ensure that they are working in synchronization.
● Ensure only those who visit achievements enter the database.
● Commence recycler view implementation of leaderboards
● Get Approval on the final Leaderboards design along with code logic(upto this juncture).

Week 6
Implement RxJava Observable pattern for the received user list.
● Discuss the final Observable pattern code implementation of leaderboards.
● Create a Pull Request for the work done on a different(from master) branch, amend as per the inputs received.

Week 10
Finalise code structure the commence implementation of pagination to facilitate lazy loading.
● Iterate upon the reviews received on the code changes so far and get it merged with master.

Week 11
Finalise how avatars would be stored(possibly local storage or cache).
● Implement avatar display along with Rank Badge display in the UI.

Write blog posts on medium every alternate week.
● Write weekly report of accomplished tasks on the mailing list (or
something more relevant)
● Prepare and submit a presentation for this project.

Google Summer of Code is an excellent platform to get acquainted with the open source community and their skillful mentors. It gives one a professional work experience in their college years where they collaboratively build a product for the welfare of the society. In this process, both the individual and the community progress and flourish. Contributing to Commons has been an enriching experience, the mentors and the community have been really friendly and helpful in giving me constructive criticism making me learn new stuff and improving my coding skills.

Full Stack web and native app Developer, currently Hub-Coordinator at Information Management Group (IMG), IIT Roorkee. During my first year at college my workspace was confined to web development, during which I worked on a few applications, for instance IMGSched (application for scheduling meetings and sync to your google calendar), in my second year my workspace expanded to Native app development and some major projects listed in the following section.
My Projects:
● CMS :-
CMS is abbreviation for Content Management System which is manages more than 6000 static pages of the official website of IIT Roorkee, the use of a Content Management system is to make a template for certain type of page (say news announcement page) so that anyone without coding knowledge (say some staff member or professor) can make changes to all those pages of that particular type by just changing the base template and publish changes.
❖ Feature additions to the Institute CMS ( 10 commits )
❖ Role: Backend developer
❖ CMS handles the official website of IIT-R website
❖ It manages more than 6000 static pages on the website
❖ Tech Stack includes Yii 2.0, PostgreSQL, RabbitMq, Apache2

● Placement Flutter :
At the Institute level it is imperative that the information flow is smooth and fast, the official placement app aims to provide the information regarding the placement and internship programs. Additionally the app facilitates direct submission of their resume directly to the companies, the app was migrated from native android
to flutter due to fast development times
❖ The official Placement app of IIT Roorkee
❖ Role: Full stack developer (81 commits)
❖ Currently under development (pre-alpha)
❖ For Security reasons it implements AES-256 encrypted tokens
for auth and resume handling
❖ Shows results for placement and internship seasons
❖ Facilitates submission of Resumes to companies
❖ Github Repo link: Placement-flutter

@Kbhardwaj13: Hi, could you consider editing the task description to make it readable (lots of very short lines)? See https://www.mediawiki.org/wiki/Phabricator/Help#Formatting_and_markup and use the "Description Preview" at the bottom, after you have clicked "Edit Task" in the upper right corner. Thanks! :)

@Aklapper thanks for pointing out :) i have made the changes

@Kbhardwaj13 We are sorry to say that we could not allocate a slot for you this time. Please do not consider the rejection to be an assessment of your proposal. We received over 100 quality applications, and we could only accept 14 students. We were not able to give all applicants a slot that would have deserved one, and these were some very tough decisions to make. Please know that you are still a valued member of our community and we by no means want to exclude you. Many students who we did not accept in 2019 have become Wikimedia maintainers, contractors and even GSoC students and mentors this year!

If you would like a de-brief on why your proposal was not accepted, please let me know as a reply to this comment or on the ‘Feeback on Proposals’ topic of the Zulip stream #gsoc20-outreachy20. I will respond to you within a week or so. :)

Your ideas and contributions to our projects are still welcome! As a next step, you could consider finishing up any pending pull requests or inform us that someone has to take them over. Here is the recommended place for you to get started as a newcomer: https://www.mediawiki.org/wiki/New_Developers.

If you would still be eligible for GSoC next year, we look forward to your participation!

@Kbhardwaj13 I went through your proposal, and wow, I love how complete it is! All the design elements look really good and thank you for all your contributions! :)

Commons Android App has been participating in Wikimedia's outreach programs for a few years now, and is highly likely to participate again. I see that you've made some really good contributions during the application phase. I suggest you keep it up and continue working with the team between now and the next round. I also noticed that you created the task on 31st March, so I'm not sure if you received feedback from your mentors on your proposal. It's an important step, so please be mindful of that in the next round.

Overall, I feel you've crafted a pretty impressive proposal and it was just a matter of circumstance. I really hope to see you as a GSoC fellow soon. My best wishes, always. :)

@Pavithraes Thanks for the insight, i will continue to contribute to wikimedia commons and come back next time :)