Description:
I have a MySQL ecosystem of a Master and a number of slaves, with an ip address that can be brought up on the master or any of the slaves for High Availability.

To reduce problems with re-syncing the master from a slave if a failover is needed (failover=the ip address is brought up on a slave after the master crashes), all the MySQL slaves are marked as read-only in their configuration and only after determining that the master MySQL server will be down for an extended period of time, will a slave be brought up read-write and made the new master until the primary master is fixed.

MediaWiki does not operate on a read-only slave, and this is an enhancement request to allow MediaWiki to operate in a read-only MySQL environment. Currently errors are thrown (usually couldn't update the objectcache), although some pages do occasionally load).

The error thrown is 1290, and if this could be caught and recognised as a MySQL read-only server error, MediaWiki could simply throw away any write queries and make only read queries against the server. Of course, each new page load would represent a new attempt at writing, since at any time the MySQL server could be brought up read-write or failed back to the master server.

The error displayed is as follows for one attempt at a page load:

from within function "MediaWikiBagOStuff::_doquery". MySQL returned error "1290: The MySQL server is running with the --read-only option so it cannot execute this statement (mysql-server-name)".

Downtimes on our wiki are difficult to schedule, and we customize new releases before upgrading. We've been waiting for 1.16 to be released so we can upgrade to that version. When it is released, I'll report back if this is still a valid enhancement request or not, and close if appropriate.

Just tried with 1.116.0beta1.
No success.
Still receiving message "1290: The MySQL server is running with the --read-only option so it cannot execute this statement (localhost)" and so I am unable to view self created page. Page "recent changes" works. 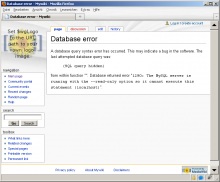 Another test with MediaWiki 1.17alpha (r64152).
Result is the same as mentioned above.

I now have a 1.16 Beta2 Version of the wiki running, and have found that viewing pages from a read-only MySQL server works (page is displayed at top, and error message is displayed on the bottom)

Krinkle added a project: Performance-Team.Mar 9 2016, 2:07 PM
Krinkle set Security to None.
Krinkle removed a subscriber: • wikibugs-l-list.
Restricted Application added a subscriber: Aklapper. · View Herald TranscriptMar 9 2016, 2:07 PM
Meno25 removed a subscriber: Meno25.Mar 11 2016, 2:34 PM
Krinkle renamed this task from MediaWiki should revert to read-only if MySQL error indicates DB in read-only to MediaWiki should assume read-only mode if MySQL says DB is read-only.Mar 17 2016, 8:32 PM
Krinkle removed a project: Performance-Team.
aaron moved this task from Inbox to Backlog: Small & Maintenance on the Performance-Team board.Mar 17 2016, 8:34 PM
aaron moved this task from Backlog: Small & Maintenance to Next In This Quarter / Apr-Jun 2020 on the Performance-Team board.
jcrespo merged a task: T135711: Set mediawiki's read-only mode automatically when database masters are detected to have read_only=1.Jul 6 2016, 8:31 AM
jcrespo added subscribers: MZMcBride, Joe, aaron and 2 others.
Comment Actions

This limitation causes issues when there is an emergency such as T139346 and increases downtime from seconds to >4 minutes.

This is huge! Thank you a lot! If this works properly (we should thoroughly test it, datacenter failovers and master failovers can now be fully automatized and will only take a ~5 seconds).