Per T248405 we are close to releasing our first feature written using Vue.js, a port of the MachineVision extension.

@AnneT and I both feel that there are a lot of advantages to working this way, including:

Now that the MachineVision port has been launched, it seems like a good time to return to this project.

In order to replicate the capabilities that currently exist on Special:MediaSearch, it seems like we would need the following set of components:

In addition to the components, we'd need to implement the following features:

Vuex is used to store results, but local state will be used in places where additional data needs to be requested from the API for an individual file (in the upcoming Quickview feature).

Below are updated screenshots of the UI as it currently stands the initial Vue.js patch: https://gerrit.wikimedia.org/r/c/mediawiki/extensions/WikibaseMediaInfo/+/610918. The UI includes some updated designs for individual result elements, but QuickView will be left for a follow-up patch. Autocomplete and filter tools have been removed for the time being but will be re-introduced in a later patch. 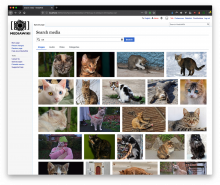 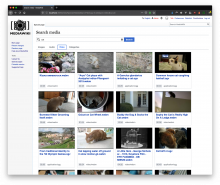 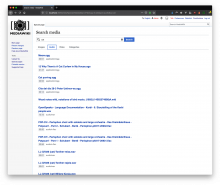 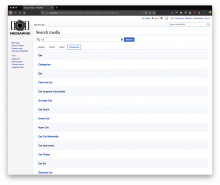 Update, based on conversations on June 29:

Noting here that QuickView will be a separate patch and pulled out of this one; it should be tracked in T256158. Also noting that it's okay that there will be no way to play audio or video from within the search results until T256158 is complete.

Also noting that this can be merged independently of moving to the CirrusSearch-based MediaSearch backend (T257295 and T252685).

@mwilliams I've attached some updated screenshots based on the current state of this patch. Hover state has been fixed as well but it's hard to convey this way. It will be a lot easier to refine the design once we get a basic version of this up on commons for you to interact with. Let me know if there's anything else that should be changed now.

This looks good to me for this ticket. We can add any subsequent changes to new ones in the future.