Assigned To
None
Authored By
Tags
Subscribers
View All 9 Subscribers

A more advanced example would be: A Wikipedia about a city uses information from Wikidata to show the name of the city's major. The page needs to be updated when the Mayor's name changes.

With increasing complexity and granularity of the content modeled by MediaWiki, and increasing flexibility in the re-use and re-combination of content, the number and complexity of such chains of dependencies increases. Inventing a new system for tracking dependencies, and updating content, for each use case, is not sustainable, and prone to problems especially when the different systems of dependencies start to interact.

Proposed solution: Create a centralized service for tracking dependencies. Any component that derives some kind of content from others should use this service to track the dependency, and be notified when content needs to be regenerated or discarded.

Scale: If used for all existing and anticipated use cases, the service should be able to scale to at least a billion nodes, ten billion edges, and a thousand updates per second. It should be designed for growing by another two orders of magnitude over the next ten years.

Persistence: the information maintained by the dependency service can be rebuilt and is self-healing, but losing all of it would cause stale data to be served for a long time, until all resources have been updated once. 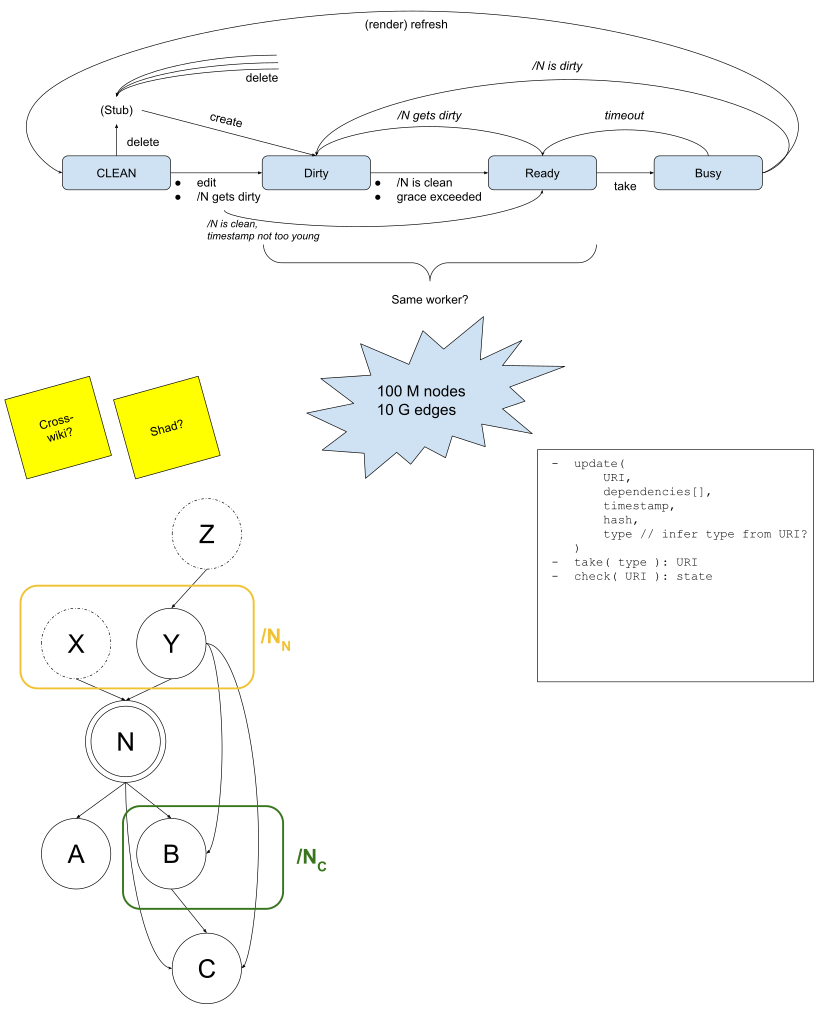 Quick brain dump of state transitions for every resource:

@Amire80! You turned my scribblings into a pretty diagram! Thank you!

This would be very useful for everything.
And super useful for all things Wikidata, especially as we see increased usage and more structured data in a similar form, such as StructuredDataOnCommons mediainfo, and other potential up coming things such as collections etc.

@Amire80! You turned my scribblings into a pretty diagram! Thank you!

You're welcome. Whatever I can do to help make this happen :)

Both relations are reasonable, but creating the Dependency Engine is not the only option, and we are not yet committed to it. We'd need a relationship like "would enable" or "would benefit from" :)