@Tarrow @Lucas_Werkmeister_WMDE @Ladsgroup When we say "PHP code" (which is pretty broad), do we mean just class dependencies, or is there anything else you had in mind?

I think I was mainly thinking of class dependencies, though I guess there are a few other types of coupling. The one that comes to mind right now is how some callbacks are moved between Lib, Repo, and Client; for instance, both Repo and Client will define a formatter-factory-callback for a data type or data value type, and WikibaseLib’s DataTypeDefinitions::getFormatterFactoryCallbacks() returns those callbacks. The signature of those callbacks (for formatter-factory-callback, two arguments of type string and FormatterOptions, and returns a ValueFormatter) is a type of coupling, I think.

Some hints that might be useful:
You can use https://github.com/mamuz/PhpDependencyAnalysis (the docker work is pretty good actually)

Here's what I use to build graph of classes:

The /^((?!Wikibase)\w)/ drops any class that doesn't start with Wikibase making the graph much smaller (so your system can easily generate it)

In the “who uses this” direction:

In the “whom does this use” direction:

Lib and DataAccess are sufficiently entangled that I figure we should, for now, treat them as one (and indeed DataAccess is rolled out as part of the Lib extension). I think the first coupling we should get rid of is the use of Repo in Client and Lib.

(I don’t think this investigation is complete yet, but what I wrote above can be reviewed already, and is probably enough for today.)

Not anything against this proposal just want to mention we have dedicated jenkins jobs that run the whole tests on "repo" mode and one dedicated "client" mode to make sure these two work independently. If "shared tests" starts running them without making sure it's not taken into account, it'll explode majestically.

Looking beyond the code, this seems like a coupling on the logic too which is actually a legitimate one. The client needs to use the repo data to inject RC records and show it. What usually happens is having an API (in the general sense of the term) to make this coupling as loose as possible which can happen though shared class/interface in lib/. Not anything against your comment though.

I'm a very visual person so I went ahead and built some graphs. The first one is high level look of dependencies in the components (lib, view, client, repo, etc.).

The second one is classes that have cross component dependency (Class foo in client depending on class bar in repo): 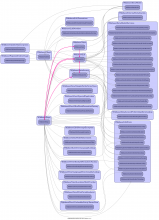 The third one is basically the second graph but removing wikibase libraries that are out of the extension: 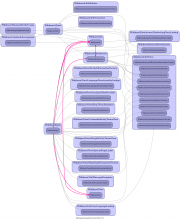 The last one is the third graph but assumes repo and view and the same (and ignores their dependencies): 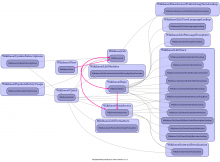 This produces the dot files for classes and then you can modify the file.

Copy over from meeting notes:

I created T255880: Remove uses of PHP classes from Wikibase Repo in Client and Lib (and subtasks) for some follow-ups to this investigation.