Portrait images (called "tall" in the code, i.e. their height is larger than their width) are massively cut on all 4 sides: 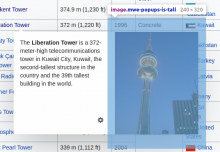 The blue rectangle in this screenshot is the actual thumbnail, cut off on all 4 sides. For reference (notice how the building on the right is more visible): 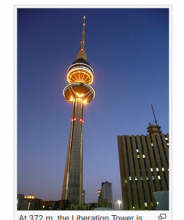 This does not happen for landscape images. I tried to understand why this happens, when it was introduced, and if it was a concisus decision to do so. As far as I can tell, no, this is a bug. This happens because:

A proper algorithm would request a thumbnail that fits in a 320 x 250 rectangle. MediaWiki can do this, but unfortunately the PageImages API doesn't. There is a single thumbsize parameter only. So a fixed algorithm might look like this:

We could use something like object-fit: fill to address these kind of portrait thumbnails but this may result in slightly stretched images and seems like the least risk prone solution here.

Here is another user wondering why portraits are "decapitated": https://www.mediawiki.org/wiki/Topic:W3r0dqpb7k2f69b4

This task was closed as part of backlog upkeep. If you believe it was closed in error, please respond on the ticket.

@alexhollender Is the problem statement clear, and do the proposals make sense to you? This change is not without risk so I want to make sure that the problem being solved is important enough to work on this. Essentially we'd change tall portraits to use object-fit fill rather than object-fit contain algorithm.

@alexhollender Is the problem statement clear, and do the proposals make sense to you? This change is not without risk so I want to make sure that the problem being solved is important enough to work on this. Essentially we'd change tall portraits to use object-fit fill rather than object-fit contain algorithm.

yes, the problem statement is clear and I agree with @thiemowmde that it would be a meaningful improvement

I don't know if there are certain image dimension restrictions already in place that would mitigate this, but wouldn't "object-fit" result in a distractingly squished image if the image is very tall? In general, this almost feels like we are altering wiki content to fit our design and UI, which makes me a bit nervous.

I don't know if there are certain image dimension restrictions already in place that would mitigate this, but couldn't this result in a distractingly squished image if the image is very tall? In general, this almost feels like we are altering wiki content to fit our design and UI, which makes me a bit nervous.

We are not currently scaling "tall" images down. So given the following image & page preview:

We are cropping the image on all four sides to make it fit the image box:

@thiemowmde can you please clarify if that understanding is correct?

@alexhollender, yes, this description sounds good. Any "squishing" is not acceptable, of course. The PageImages API doesn't even allow any squishing. This piece of code is safe. The behavior of all later code should be that of object-fit: cover;, see https://developer.mozilla.org/en-US/docs/Web/CSS/object-fit.

However, there is something off. When I created this ticket the restraining factor was not the width (you talk about 215px) but the height (250px). The last step should be to "scale the image down so height = 250px".

But there is more going on. As of now even landscape images are heavily cut off. It appears like some recent change broke this even more than it was broken before: 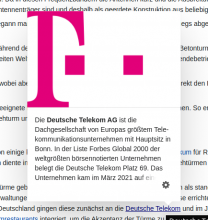 For comparison, this is the actual image as it appears in the article: 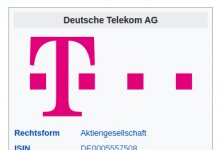 This possibly relates to T284643 as it seems something has recently changed with the preview height/width that is not to the original spec.
I've captured the two examples in a storybook for now.

I would ire on the side of caution when trying to optimize for every single page preview image. We've been here before (as have the apps team) when we worked on hero images. It's really impossible to get the algorithm right for every image without having additional metadata and I think we should seriously consider declining this under the umbrella of "its good enough".

I'm afraid I don't understand. The screenshots I posted above look seriously broken. Do you plan to revert the change that caused this?

Do you plan to revert the change that caused this?

@thiemowmde it wasn't clear to me this was a regression so I did the dirty work of trawling through git history to work out what happened here.

Since this keeps coming up on other tickets, I pulled down the original previews code (deaaf0961b7ae8d28) and with a few hacks was able to get it work. This is how this preview originally showed. 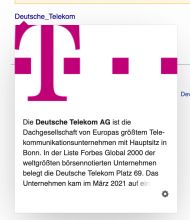 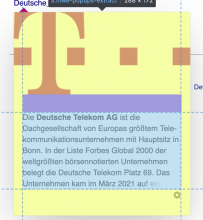 Jumping forward to the modern day with storybook the preview is 320x394. 320x347 if we drop the footer. The extract is still 156px, but the image portion has grown to 191px high. Reducing the image height via min-height: 181px; fixes this particular issue but that likely breaks all the other issues.

It looks like this regression was introduced as part of 7b0937c5a.

We have deviated from the original spec in many ways and changed the height in numerous places: T272169, T246029, T268999 .. in particular the latter, which shows square page previews where the thumbnail is huge: 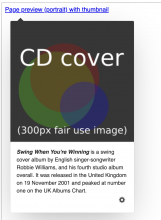 We could continue to fix edge cases in isolation but that doesn't seem like a good idea without a spec defining the options. I'd rather not continue to play whack-a-mole with edge cases as they arise as it's just causing different edge cases.... this should be blocked on T284643 and we should bear in mind this is likely a significant chunk of work if we push forward with doing this.

@Jdlrobson apologies for the delay here. These are the dimensions for page previews with images:

Note: The sizes above should apply to all page previews. The only part that is variable is the height of the text area in vertical page previews, everything else is fixed.

but will be revised as part of T284643 to keep the conversation in one place.