Using the Battery Status API. Combined with the CPU benchmark, that would allow us to see the impact of battery saving modes on different phones, as a follow-up to the Akamai study: https://arxiv.org/pdf/2003.06477.pdf

This works on desktop as well, interestingly.

The data is being collected correctly. Here are some quick initial findings, looking at the July data.

The iOS and Windows phone figures are bizarre. Possibly the API is censored/broken and always reports 100% there?

Then let's look at the breakdown per country (top 10 and bottom 10). Source of GDP data: https://en.wikipedia.org/wiki/List_of_countries_by_GDP_(nominal)_per_capita

For the following table we're only looking at Chrome Mobile on Android.

While it's clear that lower median battery countries have a tendency to have a very low GDP per capita, there are some anomalies in the top 10 for which it's also the case: Myanmar, Suriname and Bhutan.

Myanmar and Bhutan having good CPU benchmark scores as well suggests that we might have a high prevalence of tourists among Wikipedia visitors, equipped with more powerful devices sporting better battery life than devices locals use and as tourists might have better access to electricity.

Suriname is more of a mystery, since it has CPU benchmark scores suggesting slower devices, in line with the developing countries found in the bottom 10. Some local knowledge would probably be necessary to understand that outlier.

Battery level seems to only affect processing power below 20% and only significantly below 10%. That 0-10% battery level is only experienced for 2.62% of page views. Some of that could be due to the fact that users actively avoid having their mobile device go to such extreme lows, where they know it becomes sluggish. Some of it could also be that when their battery goes below 10% they avoid browsing Wikipedia as an activity (maybe focusing on more "vital" activities).

Graph of that last table put together by JP on Twitter: 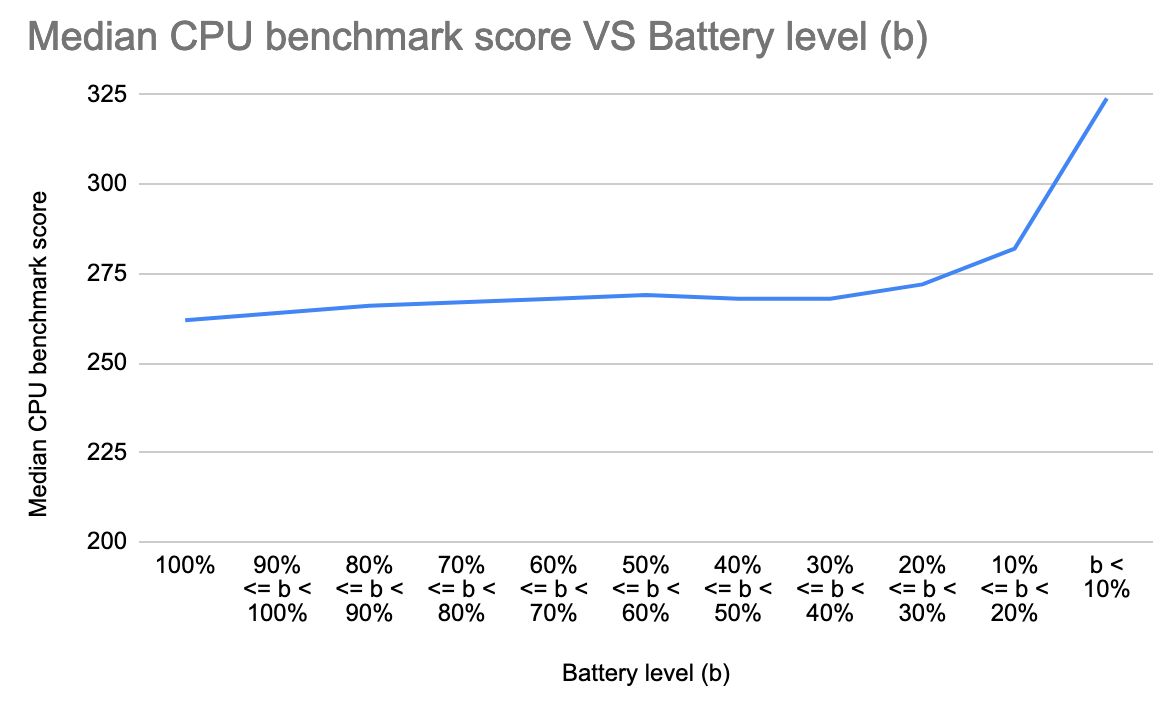