At certain narrow screen resolutions (in desktop mode on iPad, or when the screen is zoomed in for accessibility on desktop), the "value" field for qualifiers and references is only one character wide and cannot be clicked because it is "under" or within the click area for the "Remove" button. This is a new problem which appeared around mid-July and was reported on Wikidata Project Chat by two users on 21 July.

Screenshot of problem on desktop on Commons.

Screenshot of problem when editing on iPad: 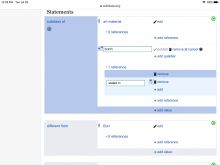 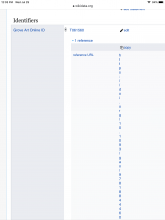 This problem seems have disappeared...

A new report of this problem was made on 13 January 2021 at WD:DEV. See References displayed in one vertical line.

When you resize a window by decreasing its size, from a certain size the reference is displayed on a vertical line the size of a character while there seems to be empty space on the right of the reference. The problem being that it is convenient to work with several windows open on the screen, therefore whose size is necessarily reduced.

Note also that the collapsable sidebar also has an influence because when opened, the reference goes faster on a vertical line when decreasing the size of the window.

This CSS in my user CSS makes it a bit better (it's not actually responsive or anything, but I get an extra 13em, which helps):

This is also not limited to references: the main data displays are also completely broken on narrower screens: 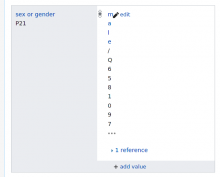