too many buttons in the toolbar, or little available width for the toolbar, causes buttons to overflow
Closed, ResolvedPublic
Actions

I think the toolbar should become 2-row automatically.

This has been solved on Italian Wikisource by setting automatic height to the container divs: $('.wikiEditor-ui-toolbar div').css('height', 'auto');

It also happens with standard buttons when using low screen resolution, or enlarging font size via browser. It is more evident on Wikisource, in namespace Page, because ProofreadPage extension forces the editbox to half width.

Fwiw... WikiEditor was probably rolled out before the series of CSS3/HTML5 additions & improvements of the day were realistically supportable by MediaWiki so its framework is kind of "klunky" as a result when compared to the latest design approaches.

One way you could recover some "button space" for example is to invoke the border-box setting for box-sizing: for the various toolbar DIV containers and then tweak your way back to the main DIV, refining any desired positioning as you go along.

To get an idea of the differences in layout without breaking anything just apply the following to your local .css file

Before and after shots of the it.wikipedia additional toolbar buttons gadget: 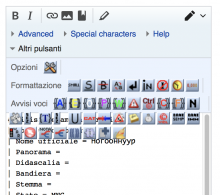 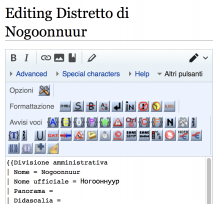