We are seeing strong signals both in RUM data collected from visitors and our synthetic tests that 1.36.0-wmf.10 caused a major performance regression during the initial page load on the mobile site.

An extra 150ms for p75 loadEventEnd on RUM data.
Much worse impact on our synthetic tests, 4.5x the normal blocking time (an extra 1.4s).

This seems to manifest itself in the form of early long tasks that freeze the browser multiple times (including downloads) before visual completion. 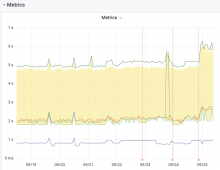 It seems like the effect happened on beta earlier, on September 16, which might also us to pinpoint the commit that caused it: 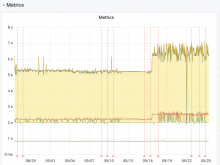 I'm extending the timeframe somewhat for those queries, as I don't know to what extent the times displayed in Grafana are rounded. I also can't query wpt.wmftest.org that far in the past to get the exact test run time.

The sudden increase in total blocking time is consistent with what we're seeing in production as of yesterday. There should be less differences in payloads between those runs on Beta, by looking at the content differences we might be able to find out what caused the problem.

I'm seeing differences in the HTML:

This might explain why there are no suspicious commits in the timeframe, as well as why in production we're seeing it happen later for the Barack Obama article. It just stayed in cache longer than the Facebook one. The trigger is that the affected article must have had its html re-generated. The actual change must have been merged to master in the days preceding 2020-09-16 15:40 UTC.

I see that there was some heavy-duty work going on with MobileFrontend sections around that time: T261769: MobileFormatter follow up work

This is my best lead so far. @Jdlrobson @Peter.ovchyn can you imagine ways in which this HTML change might cause some very significant layout and/or JS execution cost increase for the browser?

This is what we're seeing when it kicked in on Beta: 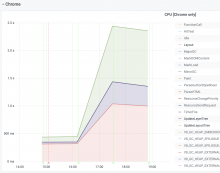 And the same just happened in production, RUM included, now that this got release with 1.36.0-wmf.10. 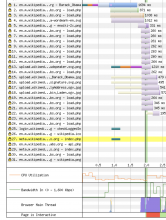 It's worth noting that Desktop isn't affected at all, on Beta or in production. Which is another reason why this MobileFrontend work is the best lead so far.

@Gilles that sounds reasonable. I'll check the performance impact of my changes carefully and get back to as soon as I have any conclusion on that.

Thanks for looking into this @Peter.ovchyn

We can clearly see the same phenomenon, whereby a new revision is made, the HTML is regenerated with that change again:

And in the case of the Barack Obama last good run/first bad run comparison, the startup modules are absolutely identical, which narrows it down to the HTML change.

I don't know the context of that change, but it seems to me like we could revert it on master, purge the test article and our synthetic tests running on Beta should recover in terms of performance if it really is the culprit.

Looking at the effect on RUM, it's severe on Safari as well, not just on Chrome:

And it's only going to get worse as more and more articles are edited/purged. The final magnitude of it might be as great as what we see in synthetic tests once all articles get the new HTML.

Change 630147 had a related patch set uploaded (by Peter.ovchyn; owner: Peter.ovchyn):
[mediawiki/extensions/MobileFrontend@master] Make all section collapsible during server side rendering

I don't know the context of that change, but it seems to me like we could revert it on master, purge the test article and our synthetic tests running on Beta should recover in terms of performance if it really is the culprit.

I just wonder. Are we talking about performance degradation during loading the page on client side or during generating it on server side?
I believe it's about client.
I see the following order is the best here:

If it doesn't work then

Its in the client (in the browser).

Its in the client (in the browser).

Nice, then patch https://gerrit.wikimedia.org/r/c/mediawiki/extensions/MobileFrontend/+/630147 should really fix that.

Change 630065 had a related patch set uploaded (by Jdlrobson; owner: Peter.ovchyn):
[mediawiki/extensions/MobileFrontend@wmf/1.36.0-wmf.10] Make all section collapsible during server side rendering

@Peter.ovchyn thank you for the fast response. Let's purge one article on Beta and one in production as soon as the patches merge and then on the next synthetic test runs we'll be able to verify the fix.

The raw HTML contains an onclick handler and has a collapsible-section class on all sections. Without those there will be a reflow as the section collapsing is applied. The onclick handler accounts for slow connections and connections where JS doesn't fully load. I can confirm our refactors removed those (accidentally) and that the above patch fixes this.

https://fr.m.wikipedia.org/wiki/Spain is a good example to see the problem here (on mobile device watch as the sections display and then collapse).

Unfortunately, these pages are in cache now, so the quicker we get the patch on production the better.

I think that the articles that got the "bad HTML" since yesterday did so because of edits. Which means that they're most likely articles that get edited frequently, i.e. things should get back to normal in the next 48 hours (assuming that the fix works). To put things simply, if an article was edited in the last 24 hours, it's pretty likely that it's going to get edited again in the next 48 hours. There will be a long tail that won't, of course, but I have a feeling it's going to be pretty small traffic-wise, since edit frequency and read traffic tend to be correlated as well.

If global performance metrics are still elevated on Monday, then we can issue a mass purge of all articles if necessary.

Change 630147 merged by jenkins-bot:
[mediawiki/extensions/MobileFrontend@master] Make all section collapsible during server side rendering

I confirm that the inline JS and collapsible-block class are back on Beta after purging the test article.

I don't have deploy rights, but I can be around to test if necessary. Peter should be finished for the day.

Change 630065 merged by jenkins-bot:
[mediawiki/extensions/MobileFrontend@wmf/1.36.0-wmf.10] Make all section collapsible during server side rendering

I deployed the backport and @Jdlrobson said it was working on mwdebug2001, but I don’t know how to confirm it after deployment. There are lots of screenshots of dashboards in this task, but I haven’t found any of those dashboards yet.

One relevant dashboard should be https://grafana.wikimedia.org/d/000000057/webpagetest-drilldown?orgId=1&var-base=sitespeed_io&var-path=webpagetestEmulatedMobile&var-group=en_m_wikipedia_org&var-page=_wiki_Facebook&var-browser=&var-location=us-east-chrome&var-connectivity=3gfast&var-view=firstView&from=1600812000000&to=1601071199000&refresh=5m – if all is well, the Metrics panel should go back to normal with the next test run, if I understand correctly.

I think that’s good enough to remove UBN status, though I’ll leave the closing to someone else.

The fix is indeed confirmed. I'll keep an eye on RUM metrics and do a mass purge on Monday if things haven't mostly recovered by then. Thanks for the help @Lucas_Werkmeister_WMDE @Peter.ovchyn @Jdlrobson @dpifke @CDanis !

When we rollbacked it got much better but I can see on our new mobile phone setup (running tests on a Moto G5) that we introduced longer CPU tasks (meaning the browser will freeze for the user) than before:

For example pages we test it increased by 400-500 ms. So I think maybe there are work that still needs to be done.

@Jdlrobson @Peter.ovchyn can you think of ways that despite the backported fix the refactor could still cause some amount of new long tasks?

@Peter I'm not seeing the same elevated levels after the revert on WebPageTest, is WebPageReplay the only place where you're seeing this?

@Peter I'm not seeing the same elevated levels after the revert on WebPageTest, is WebPageReplay the only place where you're seeing this?

I've been working on this over past days, but have no good understanding on what's going on so far. I this some more info could help me:

Here's some info about those systems:

@Peter are you talking about the Kobiton WebPageReplay? Is that where that dashboard's data is coming from?

On emulated mobile I see that things have gone back to pre-deployment levels of long tasks: https://grafana.wikimedia.org/d/000000059/webpagereplay-drilldown?orgId=1&var-base=sitespeed_io&var-path=emulatedMobileReplay&var-group=en_m_wikipedia_org&var-page=_wiki_Sweden&var-browser=chrome&var-connectivity=100&var-function=median

If we're only seeing sustained elevated levels on the Kobiton data, I'm not sure it's to be trusted, given how new it is and the fact that WPT and classic WPR have gone back to normal. We don't have historical data to verify either.

@Gilles yep. I think the data on Kobiton are correct and the others are screwed :) The reason is that I can see that on both Moto G4 and Moto G5. The test on WebPageTest and the test with WebPageReplay/Browsertime run on AWS and I think this is proof of that the CPU on that c5.large hides a lot of problems that we get on lower end phones. However one of the phones lost its internet connection a couple of days ago and it hasn't been fixed yet so it's hard to see numbers across the board.

I checked the metrics again: https://grafana.wikimedia.org/d/bB670cFGk/mobile-performance-synthetic-testing vs https://grafana.wikimedia.org/d/Tw-s6iKMz/mobile-webpagereplay and it is actually only using WebPageReplay that the CPU time spent is higher after the fix, so it that is probably not correct ( even though we have little data for the tests that runs direct against Wikipedia).

@Peter @Gilles is there any way to get snapshots of html of a real page before issue appeared and after? Do we store them somehow?

@Peter.ovchyn you can set that from WebPageTest runs, that's how I discovered the HTML differences before and after the deployment. Explore a particular WPT run and you can look at the list of requests the browser made and get the response body. In my previous comments from Friday you'll find links I posted to WPT runs before and after the problem.

@Peter.ovchyn you can set that from WebPageTest runs, that's how I discovered the HTML differences before and after the deployment. Explore a particular WPT run and you can look at the list of requests the browser made and get the response body. In my previous comments from Friday you'll find links I posted to WPT runs before and after the problem.

Sorry, there's too much information. Maybe therefore I can't find a link to exact run (or, maybe, list of runs) and html that run was based on. Coun you please point?

following along with @Gilles and @Peter conversation it sounds like nothing further is needed from reading web? Please reach out to me and the team if that's not the case via a new phabricator ticket.

Nothing more is needed, indeed. @Peter.ovchyn I'm happy to point you in the direction of where to look at before/after HTML in WebPageTest with screenshots if you want to learn how to do that.