One of the things that came to mind in T259817 is the fact that while we may use a variety of mechanisms to trim down our mediawiki docker images, it's quite possibly they 'll end up being rather large. We also can't rule out the fact that no matter what trimming we do to them, they will eventually start growing in size again over time.

What we would like is to know is which bottlenecks we have in our infrastructure that could/would end up causing issues during a deployment of mediawiki. Arguably we are using scap almost daily and things don't break, but the container image approach is different enough to warrant this investigation.

Of the above, I 'd give this order in terms of probability of having issues. docker-registry, swift, network.

One simple way of testing this is to just create manually a number of docker images of various sizes (say 1G to 40G) push them to the registry and then fetch them simultaneously from as many servers as possible in the backup DC and during a scheduled maintenance window. That should keep the risk low and the possible consequences not felt by end-users.

akosiaris triaged this task as Medium priority.Wed, Sep 30, 3:59 PM
akosiaris created this task.
Joe raised the priority of this task from Medium to High.Tue, Oct 13, 8:06 AM
Comment Actions

This needs to be done while we have one DC turned off for most traffic as we do right now, IMHO.

I'm looking forward to seeing the results of this stress test. Does the docker registry have any controls to limit the number of connections and/or total bandwidth?

/var/lib/nginx is a tmpfs with size of 1G on the registry hosts. /var/lib/nginx is meant to be used when client_body_buffer_size is not of a sufficient size. The image is a single layer 6GB one. The error happens at ~4.4GB despite the 1GB size of /var/lib/nginx. My guess is compression right now, I 'll bump the tmpfs size a bit and see how it helps

The first pull test was successful. 34 hosts pull from the registry simultaneously. The test lasted about 5minutes.

Observations (most innocuous to worse):

Innocuous to indifferent for now 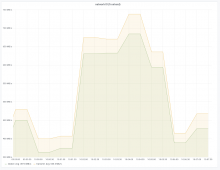 It's important to note that the tests happened while swift was rebalancing itself so that's great.

There is compression at play here. nginx reported the following in access logs. Error logs were empty

So a 5.99GB image, resulted into a transferring only 1378740282 or 1.28GB. This isn't HTTP Content-Encoding compression, the blobs comprising the images are shipped as a gzipped tarballs.

There is a downside to this. On the client side, the images need to be decompressed, which consumes some time. A relevant task is https://github.com/moby/moby/issues/1266 where people ask to disable that for speed reasons. As I point out below, the compression part, for now, has been beneficial. 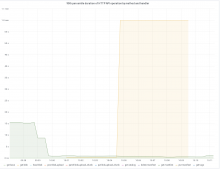 It's misleading however. You can tell immediately by the way it flatlines at 1m when the test lasted 5minutes and it was a single blob to be downloaded (just 35 times). It's also a prometheus histogram and my guess is the largest bucket is 1m. 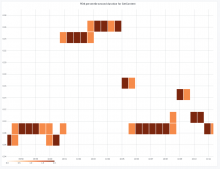 I 'd say expected given the size of the blob.

I 'd expect those to increase even more with more hosts pulling the data, which would make all deployments relying on this infra slower. However on the bright side, neither nginx nor docker-registry software hit any limits.

We are currently capped at fetching at most 2Gbps due to the number of docker-registry servers we got (2). See

The hosts also did not have a good time CPU wise. Interestingly a 20% of this was user CPU, with the other 38% and 12% being system and softirq.

+1 on this suggestion. For small requests, there will be minimal writing to a real filesystem for files that exist briefly. These writes would be background I/O in most cases.

+1 on this suggestion. For small requests, there will be minimal writing to a real filesystem for files that exist briefly. These writes would be background I/O in most cases.

The main issue will be that large pushes to the registry will become slower. Hence CI will be taking longer overall. That being said, we probably should try to optimize for a combination of client_body_buffer_size and a larger but slower fs that addresses the most common patterns in our CI.

That being said, with compression on the client before the push taking also a significant time as well (per people's reports in https://github.com/moby/moby/issues/1266), the delay from lower IOPS might not be the most contributing factor here (and there doesn't seem to be anything we can do about it)

I 'll try and devise a couple of tests to run to get numbers on this.

For the We are limited on the docker-registry infrastructure side., the sanest way out of this (until we hit the next bottleneck) is to scale out, aka just more docker registry VMs. That should be easily doable, we got the capacity. The VMs should be split across the rack rows for higher availability.

The interesting question here, how many? I am gonna put a limitation here that it should be in multiples of 4 (per DC) to match our failure domains (aka availability zones).

However there is another factor to consider here and it's the decompression after the fetch of the blobs. We need also numbers as to how much time decompressing the layers takes. Putting this requirement in as well for the next test.