Malayalam Font not rendering correctly in Wikidata (due to several ways to enter a Chillu character)
Open, Needs TriagePublic
Actions

I have ran a bot on Schoolwiki (a project powered by Mediawiki) to purge the pages. An example edit is:
this

I also think that it has something to do with T33950: Update Malayalam fonts packages.

@Adithyak1997: It's been an actual edit, so this is not about rendering only, I think, but about people actually entering different letters. What to fix here server-side?

Which input tools in which browser and browser version on which operating system have been used?

In Malayalam Unicode there is a character called Chillu. (ൺ,ൻ,ർ,ൽ,ൾ) are the chillu in Malayalam.

according to Unicode encoding these chillu can be created by two ways. The Malayalam Unicode table (enwiki) says

But there is another way to create a chillu like 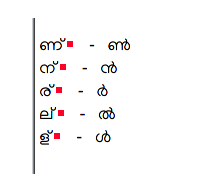 So we can represent a single character in two different ways, aka two different letter sequence in Malayalam. And we are trying to avoid that. Because this cause a big problem with search and hyperlinks.

To resolve this problem there was a fix introduced in Mediawiki called $wgFixMalayalamUnicode. If this set as true then all the chillu created by ZWJ will be replaced by the single character chillu (atomic chillu) on save of a page in mediawiki.

What may be the solution

Now Wikidata is not converting ZWJ chillu to Atomic chillu. This may be happening because the default langauge of Mediawiki using in Wikidata is not Malayalam. But we need to set $wgFixMalayalamUnicode to true. So How to resolve this problem?

Also there is a thing called $wgAllUnicodeFixes . But this thing will do the fixes for all languages. If this set to true in Mediawiki used by Wikidata then the problem may be solved. @santhosh can you look into this problem?

The rendering issue can be solved by just using a good quality font and latest version. There are many.

The dual encoding issue is quite complicated and has been debated a lot. Practically, the editors should use an input method that is bug free and following atomic chillu. The already done edits can be fixed using a bot. Any search/sort/processing on Malayalam should be aware of this complex encoding model(not limited to Chillu) and process the content accordingly rather than interpreting as raw byte sequences. I do not think that a configuration or extra processing wthin a single software like MediaWiki can solve the complications.

I do not think that a configuration or extra processing wthin a single software like MediaWiki can solve the complications.

Actually, this problem is not occurring in Malayalam Wikipedia, where, in my info, the variable/parameter mentioned by Ranjithsiji is set to be true. So, in whichever chillu the user is entering, it will actually be transformed to the one supported by Mediawiki, automatically, once it is enabled here I think.