This task will track the racking, setup, and OS installation of ml-serve100[1-4].

Please note these are GPU capable chassis/servers ordered via T266482, with the GPU cards being ordered on T266516 & a future task. Only 1 GPU was ordered initially, as the new AMD Radeon 5700 XT has NOT been test fitted and power tested in the chassis. Once a single GPU has passed testing, we can order the remaining GPUs.

We went conservatively on this ordering cadence (one to test), as GPU cards all are non-returnable once opened, and even returned unopened will incur a restocking fee.

Hostnames: ml-serve100[1-4]
Racking Proposal: 4 hosts will be in the same cluster, so differing racks at minimum. row diversity is preferred, but understood if a single row is at capacity then 2 hosts may need to share a row.
Networking/Subnet/VLAN/IP: 1G, internal1 vlan (systems have 1G/10G nics, only need 1G at this time)
Partitioning/Raid: match an-worker[1096-1101]
OS Distro: Buster

Each host should have its own setup checklist copied and pasted into the list below.

Once the system(s) above have had all checkbox steps completed, this task can be resolved.

Servers arrived Dec 23. @Jclark-ctr - can you install the GPU into one of these hosts? 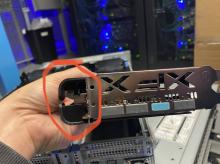 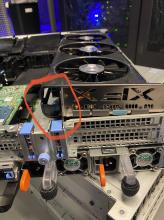 @Jclark-ctr Thanks for the photos. For clarification, does this mean the GPU does not fit or that the GPU does fit but any future GPU's order should be smaller in dimensions?

Gpu does not fit.

@RobH @wiki_willy Can we set up a call to discuss next steps?

@RobH @wiki_willy Can we set up a call to discuss next steps?

Sure. Additionally, my understanding of the GPU market is that any given GPU has multiple manufacters for the GPU. This was a "XFX - AMD Radeon RX 5700 XT 8GB GDDR6 256Bit PCIE, 246601", so we may be able to find another manufacter of this GPU chipset, which may have better/smaller form factor for within the case.

This is exactly why we only wanted to order 1 to test! =]

Additionally I've created T271351 to determine if there is another version of this GPU chipset via Rahi that may have a differing fan/heatsink assembly that would suit our needs. Discussion for that can take place on task T271351.

Pleae note that after our sync up with @wiki_willy and @calbon, the followup steps are:

This had a mistake, introduced by me in the racking task, of 10G networking. These have 1G/10G nics, but ONLY need 1G. I had updated the codfw racking task, but failed to update this racking task.

So as a result, @Jclark-ctr had already racked 2 of them in 10G racks as of today, and will need to relocate them into 1G racks. Also updating that row diversity is prefered, but if one row in eqiad is overpopulated due to cloud, then two servers may have to share a row (but none should share a rack.)

Ran the dns cookbook for these hosts fine, but the homer script has issues:

fixed the netbox issue, hsots will be imaged later today

fixed the netbox issue, hsots will be imaged later today

I hadn't circled back to this yet, but its on my radar to address/image today!

So I went to image these, and none of the mgmt interfaces are pingable. So either they aren't plugged in, or they were misconfigured. Since they aren't remotely accessible, I cannot troubleshoot this.

We'll need either @Jclark-ctr or @Cmjohnson to investigate and update the task description about the hosts being mgmt configured.

So 100[123] failed the final part of the reimage script with puppet run, no clue why, need to investigate.

1004 is failing to get a DHCP response for PXE boot, and isn't being seen by the installer host request log/syslog. The switch shows the port online, so I need to investigate that as well.

Overall I've been fighting these all day to make them do what I want, so I'm quite frustrated and need to step away from them for a short bit.

next step is use image script again and investigate its errors.

all four ml-serve hosts have been installed. They do not yet have GPUs, but our sync up showed they could be used without for now.

Ready for your team @calbon