In many cases marine cities or small marine nations are used as "home port" or "port of registry": https://w.wiki/tVw counts 20.8k such cases.
Examples:

Eg Panama City is often used as a port. Query https://w.wiki/tVn selects the city plus all ports in Panama, and shows them on a map. 4 of the ports are at the entry and exit of the Panama Canal, and Panama City is distinct from them, and is not a port. Therefore it's incorrect to say that the port of a ship is Panama City. 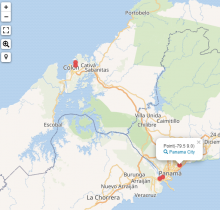 There are two ways to fix this:

Therefore I tend towards solution 1.
Do you agree?

Assuming this is about Wikidata-Query-Service

This is a data modeling issue and not WDQS related, so I'm removing the WDQS tag.

This seems like something that needs to be sorted out on-wiki. Is there anything you need from the dev team?