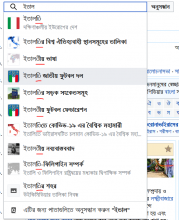 In the leacy vector version, we didn't have this issue. 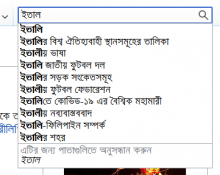 From conversation with @TJones on Slack:

As noted in the ticket, it seems similar to T35242. In general, you shouldn't put any markup right before a character that matches \p{Mark}. Since \p{Mark} isn't available in JavaScript you can either import another library that supports all the named regex classes, or define your own. (I defined comboMarks in jquery.highlightText.js last time I looked at this.)
Another option, which I think Google has adopted, is to stop trying to highlight partial matches in some scripts, including most of the Indic scripts.

Next steps: We need to do a release of wvui and bundle to core. Given @cjming also made some modifications to wvui, perhaps the two of you could pair and do this together ?

@Edtadros: As discussed, you'll need to test this on your local development environment.

2. On your local development wiki

@Edtadros: I've updated the instructions above, per our most recent 1:1 ☝️

✅ AC1: Verify the component bolds the text after the searched text. 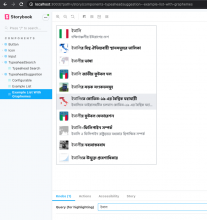 Go to https://bn.wikipedia.org
Type something in the search box in Bangla e.g.: "ইতাল"
✅ AC1: Verify the searched text is not bolded, but any additional text in the title is bolded. 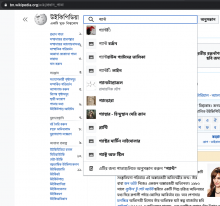 ✅ AC1: Verify the component bolds the text after the searched text.

Beta looks good. Thank you all for fixing this.

Q: When this will be deployed on bnwiki?

Just noting that the remaining work involves updating the version of WVUI in core for this change to take effect.

@Jdrewniak That seems fine, I wait on the Storybook change for the next release.

From my perspective, https://gerrit.wikimedia.org/r/c/wvui/+/676236 is not a blocker for doing a release. The storybook change doesn't seem to add any functionality, only code refactorings.

@Edtadros Was hoping that https://en.wikipedia.beta.wmflabs.org/wiki/Main_Page?uselang=bn would be sufficient, but the articles in the typeahead results need to carry an example. Maybe we could fake it by adding one to a certain namespace, like a user namespace article… 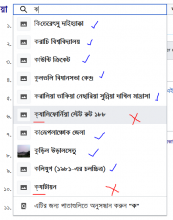 I just noticed: legacy vector version also has this problem. It would be great if this could be fixed.

TL;DR: The best solution is probably to turn off partial-match highlighting for wikis (like bnwiki) written primarily in scripts that have conjucts that don't do well when split by highlighting, but leave the generic combining-mark glomming logic in place for other wikis (like enwiki) that have highlighting and titles in such conjunct-using scripts, so the results don't look entirely ridiculous.

I just noticed: legacy vector version also has this problem. It would be great if this could be fixed.

If I can jump in here... for those who aren't real familiar with Indic scripts, the conjunct ligatures are special forms for when two characters sort of merge together. There's nothing quite comparable in English, but it would kinda be like splitting and bolding half of æ as ae or w as vv, but worse.

Conjuncts and highlighting have always been a problem. You can still see it on English Wikipedia—which has plenty of title redirects in Bengali and other Indic scripts. Searching for ক gives one example just like the one @Aftabuzzaman had: 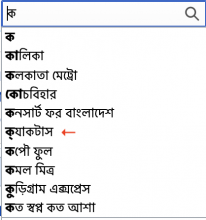 The problem is a combination of things. Font rendering systems do okayish with Latin and maybe Cyrillic when you have characters and diacritics where one half is bold and the other half isn't. So é with a bold e and normal accent is this: é and vice versa is this: é. Not perfect, but it doesn't look terrible like ক্যা does with its dotted circle. If only Indic font rendering were better we wouldn't even have this problem!

The generic solution implemented here prevents these really terrible cases with the dotted circles. A smarter implementation that knows about specific conjuncts would probably have to be language specific and done for each language with conjuncts and other complex ligatures.

Google used to have this problem, too, but their solution, which I also suggested above, is to not do partial-match highlighting for some scripts, like the Indic scripts. Here is a screen shot of a search for ক্: 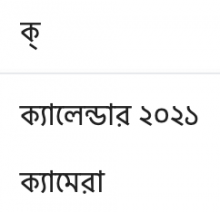 I'd like to point out that even with highlighting turned off on bnwiki, the fix here would still be useful on larger wikis with highlighting enabled (like English Wikipedia), because it would give completion matches like ক্‌যা, which is worse than ক্যা, but much better than ক্যা, I think.

Resolving this. Follow-up for the second bug will be in T281797: Remove all bolding of search results on a variety of wikis