What happens?:
Rendering of "🤣" in https://commons.wikimedia.org/wiki/File:Test_suite_resvg_e-text-027.svg is wrong 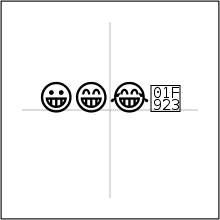 Actually the file is from a SVG-test, decalring that
*chrome/firefox/librsvg 2.51 renders it correct
*resvg/inkscape/batik and others render it wrong

Rendering of resvg on my local computer results in 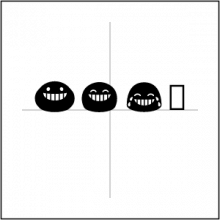 It looks like a font issue to me, and I do not see any of the images as "wrong".

In the first picture, the fourth character is a format that is often used for unimplemented characters.

The second picture shows a font that has colored characters instead of the black-and-white characters of the first.

You should be able to download that font at https://www.google.com/get/noto/

Definitely a font issue, probably not a librsvg issue. Debian doesn't package Noto Color Emoji until Buster, so we'd have to backport (unlikely) or wait for T216815.

Yes this character seems to be a font-issue. However it is strange, why now resvg does not render any characters any more on the same computer (I run in the meantime sudo dnf install google-noto-\*)