Mentioned In
T307030: Menu should be able to extend past the edge of its container
T297763: Migration of Mentor dashboard modules to Vue
T296646: [Epic] Migration of front-end modules to Vue.js components
T308468: Switch from WikiLambda Dialog component to Codex Dialog component
T270766: Request for recommendations on UI technologies (oojs/ooui, mustache, vue.js)
Mentioned Here
T189569: Avoid contradicting messages between Getting Started and Visual editor for new users
T235812: Make Getting Started temporarily suppress the VE dialog by adding "vehidebetadialog" to the query string

I wrote a sketch of a dialog component, before abandoning it and working on other things: https://gerrit.wikimedia.org/r/c/wvui/+/699788 . It's very incomplete, but here are some of the things I had in mind while writing this.

I wrote my code using the method approach, but on reflection I think I prefer the v-model approach.

Desktop vs mobile mode: The MediaSearch code that I copied detects whether it's in desktop or mobile mode by looking at the mw global, but we can't do that in WVUI. Desktop vs mobile controls whether the primary action appears in the header or the footer, which is a relatively major change and not easily controlled through CSS. Maybe we render it twice and use CSS to hide one or the other, based on the viewport width? Perhaps we can do something similar for fullscreen too.

Focus traps: MediaSearch has a single "landing" div with tabindex=0 at the top of the dialog. OOUI has similar divs called "focus traps" both at the top and bottom, which are designed to prevent the focus from leaving the dialog when the user tabs past the last thing in the dialog. When one of the focus traps is focused, an event handler moves the focus to the first/last focusable element in the dialog. Since finding the first/last focusable element is tricky, I think we might be better off setting the initial focus on the "landing" div (what OOUI calls the top focus trap) and making it loop around such that if the user tabs to the bottom focus trap, we focus the top focus trap (and maybe vice versa, if we can avoid infinite event loops).

Overlays: This isn't implemented in the WIP patch, but I did think about it. Components that use certain kinds of absolutely positioned things that extend outward from them, like the Dropdown menu or the suggestions list in TypeaheadSearch, run into trouble in a dialog. The absolutely positioned menu may try to extend beyond the boundaries of the dialog, but it won't be able to. This is especially noticeable if the dropdown is near the bottom of the dialog. To address this issue, OOUI dialogs have an overlay div that covers the entire screen (like the div MediaSearch calls "overlay" and my code calls "shadow", but this one comes after the frame and doesn't block clicks), and dropdowns in dialogs place their menus in there rather than inline, allowing them to visually break out of the dialog.

In OOUI, passing this information down correctly is annoying: code in dialogs has to pass { $overlay: this.$overlay } to the constructors of child widgets, and those widgets have to pass it down to their children, etc. One missing link in the chain breaks it, and causes the cut-off behavior. In Vue, we could do this much more conveniently using provide/inject. Dialogs would provide their overlay div as 'overlay', and components like Dropdown that use absolute positioning would use inject: [ 'overlay' ], which gets the overlay value from the nearest ancestor component that provides it. See this sandbox for a code sketch.

Random other things about my patch:

My team would like to be closely involved in the implementation of this component, as overlays are pretty much integral to the mobile experience as everything there is an overlay / dialog.

In Mobile, I expect we will need to eventually render a dialog using vue-router to manage state.
I wrote a proof of concept a while back.

Regarding fullscreen, I'd suggest making an explicit property for dialogs that should go full screen at lower resolutions. On mobile, the fact they go full screen on tablet/desktop was not a design decision - just an artifact of building mobile first.

Dialog state management can't be strictly local to the codebase that the dialog is defined in. If it is, then we'll continue to run into issues like T189569: Avoid contradicting messages between Getting Started and Visual editor for new users. That issue was fixed temporarily – it'll be in production in five years… 😉 – at the cost of implementing a signal in VE for other codebases to trigger (see T235812). Please account for cross-codebase dialog open/close signalling in your design lest our codebases be littered with many more such temporary fixes.

Regarding patch: I was curious to explore the differences between the complex dialog on desktop and mobile and see if the same component could serve them both (which it seems it could).

@phuedx I agree on the comment about dialog state management, but I also think that for this very reason it shouldn't belong in the component library. I would expect this to be a separate library inside MediaWiki core. e.g. maybe it's Vue-router.

The component should be dumb and agnostic to any concept of being open and retain no knowledge of other dialogs. Perhaps that should be split into a separate bug ?

I wrote my code using the method approach, but on reflection I think I prefer the v-model approach.

Another thing to consider is cases where state changing behavior should be built into a component for usability and accessibility reasons. With Dialogs for example, pressing ESC should close the dialog, and I'm not sure how that would work with the v-model option. I also think regardless of the approach taken, it feels important to try to find an approach that can be used consistently across DS components with states. Off the top of my head, Popups is another component where there are multiple events that could impact the state (i.e. pressing ESC or clicking out side of the popup box).

Not looking for review right now,

In GlobalWatchlist we currently use the dialog created by OO.ui.confirm to interact with the viewer - that method returns a promise for which button was clicked (resolved to false if cancel, true if OK) - I would hope that any WVUI dialog component has a similar way to interact with it where it doesn't need to be manually included in the template and told when to display or not, but rather have a public api like OO.ui.confirm does.

I've updated the task title from Basic Dialog to SimpleDialog since we will have simple and complex dialog variants and I guess we will cover only the simple one in this task.

Here you can view the Figma spec sheet.

NOTE: Do we want to define a min and max width for the dialog? Will it be aligned to the columns of the grid or will have fixed width?

I move the task to Ready for development and I leave the task free to be assigned by whoever starts with its development. If there is a use case missing or something needs to be updated, let me know so I can reassign to me the task.

Chiming in from the abstract team! We currently use a dialog that looks like this:

Thanks @JKieserman, this is a helpful example! This is mostly in line with what we've started building: an icon-only "close" button, a primary action that can either be progressive or destructive, and a default action.

Chiming in from the abstract team! We currently use a dialog that looks like this:

@JKieserman with the new SimpleDialog component we could cover this use case since we can use both primary-progressive and primary-destructive buttons as primary actions (view these use cases in the spec sheet).

As @AnneT comments, the only difference with our new SimpleDialog component is that primary action will always be on top when the buttons are in vertical. 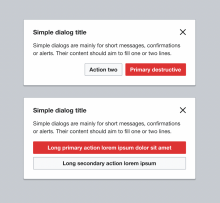 @bmartinezcalvo Another question: The OOUI dialogs scale in and out slightly (see demos) for a more intuitive transition. Is this something we should consider implementing in the Codex version? We could start with the same transitions that are used in OOUI and refine from there.

@bmartinezcalvo Another question: The OOUI dialogs scale in and out slightly (see demos) for a more intuitive transition. Is this something we should consider implementing in the Codex version? We could start with the same transitions that are used in OOUI and refine from there.

@AnneT what if we implement the same behavior as in message component?

@AnneT about the width of the SimpleDialog, do we want to implement different sizes as we have in OOUI demo or do we want to have one single SimpleDialog size in Codex? I assume we need a single size for now and we would add new sizes in the future if we need them.

@bmartinezcalvo I agree; let's stick with one size for now and add the option for configurable sizes in the future if we need to.

I guess we're technically offering two sizes in the initial implementation: fullscreen or not.