Include the percentage of changes when showing feedback after updating the translation
Closed, DeclinedPublic
Actions

After the initial iteration for the feedback shown to users when they update a proposed translation (T259511), part of the messaging was not implemented. In particular, this ticket proposes to include the percentage of change made by the user: 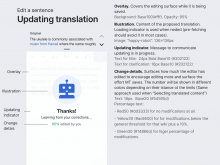 The video below shows how that part of the message is not shown:

when I found this issue, the code was probably not updated on sxlabs