Mentioned In
T294521: Finishing touches on keyboard shortcuts in the new template dialog

Duplicates Merged Here
T299486: Shortcut for adding template has another use

I think this was accidentally assigned because I created a subticket from the other one.

From today's demo time: I realized that Ctrl+Alt+D minimizes all windows in Ubuntu.

That's a little confusing, because the actual keyboard shortcut for this is described as Ctrl+Super+D (with super being the Windows key). But there is another mapping that makes the Windows key and Alt behave the same (in certain situations?). I can see this in gnome-tweaks: 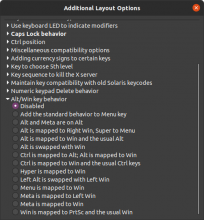 Suggestion: Just use Ctrl+D. This shortcut isn't free either. It's the bookmark feature in many browsers (tested with Chrome and Firefox). However, what's the point of bookmarking an active template editor dialog? @ECohen_WMDE, do you think this is fine? What should it be on Mac then?

[mediawiki/extensions/VisualEditor@master] Update shortcut to add a part in the template dialog, take #3

Team has decided to use <control>-D.

[mediawiki/extensions/VisualEditor@master] Update shortcut to add a part in the template dialog, take #3

Just tried this on beta and it's not working for me (the shortcut is still bookmarking the page). Is this a bug or is it not yet live on beta?

Actually after discussing with Timur, we seem to be having different issues and which go beyond just this shortcut. Will create a follow-up ticket to track them all together

This might be because a specific Mac shortcut is needed. We had no chance to fully test this on Mac, yet.