I'm trying to reimage cloudvirt1028 which a slightly different puppet role and can't get it to pxe boot.

I've tried the sre.hosts.reimage cookbook but have also tried pxe booting via the bios setup and either way I just get a long hang and then a fall back to hdd boot.

Due to failed reimage this host is probably in a fairly messed-up state in netbox and puppetdb.

I think this might be the same of T296856, and the host in need of a firmware upgrade. Adding DCOps.

btw this host is currently out of service and invisible to icinga so it can be rebooted whenever.

updated the firmware of the bios, both network cards, raid controller, and backplane. system booted back into the existing os.

The host keep failing and from the logs on the install server the pxelinux is never offered. Looking at the DHCP logs I found them not following the usual offer workflow:

To be noted that the host is behind one of the cloudsw switch. @ayounsi , @cmooney do you think that this could be the culprit and maybe option 82 has some issues with those switches configuration?

The other option is to retry another reimage while keeping a tcpdump on the install server to see the DHCP packets in their entirety.

To be noted that the host is behind one of the cloudsw switch. @ayounsi , @cmooney do you think that this could be the culprit and maybe option 82 has some issues with those switches configuration?

The cloudsw is configured to insert the option 82 data into DHCP requests the same as the other ASWs. The requests in the above logs have been forwarded by cr1 and cr2 core routers, both of which receive a copy of the original DHCP broadcast frame. The install servers are correctly configured to match the data that it should be getting added.

The other option is to retry another reimage while keeping a tcpdump on the install server to see the DHCP packets in their entirety.

I think that would be a wise next step, I'll chat to Andrew see if we can do that, might shed more light on what's happening.

Looks like the DHCP server is returning what it should.

But the host keeps sending further DHCP requests, so not sure if the replies are making it. PCAP file attached.

@RobH @wiki_willy sounds like this is back in your court. Cathal and I are out of ideas :(

Ok the traffic is being relayed by cr1-eqiad at least:

cr2-eqiad gets the requests, and is forwarding them as we can be seen below, but I don't see the replies:

Given the fact the install server is getting requests from both CRs, and sending replies to both, I'm not sure why cr2-eqiad does not seem to be relaying the replies. Of course if cr1-eqiad is doing so the overall process should still work.

Not sure if this has any bearing on the above, but trying to ping each CR from install1003 I note that cr2-eqiad is blocking the ping:

labe-v4 seems to be the only relevant filter, and I can't see a difference on either that would affect it.

I should have realised this on Friday, but I think we can be sure the DHCP responses from install1003 are making it to the host.

Initially the host sends a DHCP DISCOVER message to obtain an IP, and install1003 responds:

For whatever reason, a few seconds later, the host sends another DHCP packet, but this is a DHCP REQUEST, specifically asking to renew the IP it was allocated in the first exchange:

After getting an IP from DHCP but before starting the Debian installer it needs to fetch:

etc ... and eventually the actual installer

also might want to check logs on apt1001, it should be nginx there, around this:

then see how far it gets.

maybe check apt2001 as well for good measure, even though I don't think it would use that for codfw

@Dzahn Thanks for the pointers. There is one log entry which seems to be from the affected host requesting the URL that is being returned in DHCP

Interestingly that's from earlier today, not sure if someone tried to re-image the host earlier. I don't see any equivalent logs for Friday evening when we attempted it multiple times.

I think probably the best next-step is to try the reimage again and have someone from Infra Foundations monitor the console to see if there is any info there that might be relevant. I'll see if we can proceed to do that.

Ok well despite what I said earlier I can confirm the DHCP is failing. It isn't visible on the serial console, but via the virtual monitor port you can see it times out at DHCP stage: (I took a video of this but couldn't find good way to link it here):

Ok so on the back of that I wanted to see what was actually going on host side when it made a DHCP request. So when it booted back up I logged on via console and removed the hard-coded IPv4 address from eno1np0 manually using 'ip', and then manually initiated dhclient to obtain an IP (after making sure install1003 was in the right state to return an IP). When I did this I could see the DHCP requests working, but for some reason the server went into an unending loop, sending multiple DHCPREQUESTs after it received the original offer:

I eventually CTRL-C'd out of that, and sure enough the interface had not configured itself with an IP:

Looking at the packet captures either side (install1003 and cloudvirt1028) they packets are they same. I realise, however, that the PXElinux prefix is missing. So clearly what I did on install1003 to replicate the DHCP server config during the reimage process was insufficient. I will discuss with @Volans tomorrow about how to best replicate that and try this again.

After getting an IP from DHCP but before starting the Debian installer it needs to fetch:

The host was not even getting pxelinux.0 served by the install server (missing log lines in syslog on the install server). So it's failing way before that.
For the record the host can perfectly reach apt.wikimedia.org from the current OS.

Looking at the packet captures either side (install1003 and cloudvirt1028) they packets are they same. I realise, however, that the PXElinux prefix is missing. So clearly what I did on install1003 to replicate the DHCP server config during the reimage process was insufficient. I will discuss with @Volans tomorrow about how to best replicate that and try this again.

For this kind of debug you can just use the coobook:

@Volans many thanks for the info, that is super handy :)

Using that cookbook I got the same results as my previous attempt. I needed a refresh on the normal DHCP message flow, after which I was able to see where the problem was.

First of all consider the normal DHCP message exchange:

The full exchange doesn't complete until the client indicates it will accept the servers DHCP OFFER, by sending a DHCP REQUEST back to the server. After this the server responds to the client with a DHCP ACK completing the process.

Going back to the pcaps in my previous comment you can see the DHCP ACKs are sent by install1003, but none are received on cloudvirt1028. What is also clear is that client requests are effectively duplicated, as both CR routers receive the host's broadcasts, and both relay requests on towards install1003.

That is the case for both the DHCP DISCOVER and DHCP REQUEST packets cloudvirt1028 sends. What is different is that dhcpd (running on install1003), responds to every DHCP DISCOVER message it receives, but only responds to the first of every pair of DHCP REQUEST packets. i.e. when it gets a DHCP REQUEST packet it ignores the duplicate that arrives a moment later from the other CR. I have spent a little while looking at the ISC DHCPd docs to try and validate this is the normal behaviour, but I didn't see it mentioned. Either way it's clearly happening so I did not dwell on it.

The fact the DHCP OFFER packets do make it back to the host threw me off, hence my comment above saying the DHCP was getting back, when in fact the ACKs were not.

Why that breaks things

Cloudvirt1028 is directly connected to cloudsw1-d5-eqiad. Cloudsw1-d5-eqiad is connected to cr2-eqiad directly, so it forwards broadcasts from the host over that port to cr2-eqiad. There is also a path from that switch, via cloudsw1-c8-eqiad, to cr1-eqiad in the same vlan. So every broadcast is received by both CRs, and realyed to the install server. The longer path to get to CR1 means, however, that the request hits CR2 first every single time. As observed in previous comments here and here, we know that the DHCP response packets from install1003 are not making it back if they were relayed by cr2-eqiad.

The reasons for that are detailed in the Gerrit patch I've submitted to correct the problem. To cut a long story short the return traffic is hitting cr1-eqiad first, and then getting sent out its directly connected link to cloud-hosts1-eqiad to get to cr2-eqiad. The packets thus hit a filter designed for traffic coming from cloud servers into the CRs, rather than for traffic coming from install1003, and it get dropped. The patch adds a term to the filter to specifically allow these responses.

Following a test implementation I can confirm that DHCP is now working for the host and it is entering PXEboot sucessfully :) 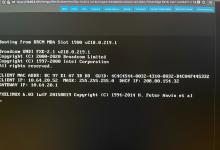 There is, of course, another issue with the reimage, in that it's not getting past the disk partitioning stage, but I will discuss that in a separate comment.

I am fine with wrangling with the disk partitioning pieces if you don't feel like it; IIRC the cloudvirts often prompt for a keypress at some point during install but otherwise succeed

@Andrew thanks yeah. I have the screen open here still and can do that if you wish:

I suspected the issue may be that the server wasn't matching any of the patterns in the below file, but I can see it seems to be accounted for:

Given that's the case I'm sort of our of ideas. I'll follow up with you on irc on whether to manually confirm.

I don't much care about having to click through the partman step but imaging still fails. Now it stalls on

I don't much care about having to click through the partman step but imaging still fails. Now it stalls on

@Andrew The puppettization for the hosts should use the correct partman that should perform automatic partitioning without human interaction. If that's not the case it needs to be fixed. AFAICT the current setup in netboot.cfg for this host should match: