As a reader, I want to be able to see a shorter version of the ToC so that I can scan it more quickly

When clicking on a ToC section link:

NOTE: Although the current design suggests the ToC should be collapsed by default, the implementation should accommodate "expanded by default" in the future (possibly as a user preference).

Given that expanding and collapsing on scroll requires Javascript, this feature should be limited to browsers with JS enabled. If javascript is disabled, the table of contents should just be expanded by default and the arrows should not appear.

The "pinned" functionality has been moved into a separate task: T300167

Is the opening/closing functionality on scroll also part of this task?

@bwang yes, this task is about opening/closing on scroll and when clicking the section heading (which also scrolls the page, so it's really about scroll position). I updated the description and title. The first screenshot was a little misleading because it included the triangle icons, which are more related to T300167.

I'm not sure if adding the triangle icons is necessary for this task. Adding them would give some visual cue that the section can be expanded, but they wouldn't have any added functionality until T300167.

Here's the image of the ToC with the triangle icon (a.k.a expand indicators?) for reference.

As discussed in standup yesterday we will not be shipping this as default functionality. Reasons:

There were also many people who really liked this functionality so maybe we should consider making it available via a preference in the future.

I've modified this ticket to adhere to the latest design decisions, so right now the patch included expanding and collapsing sections only when clicking the top-level section headings, and having the sections collapsed by default.

✅ AC2: Collapsing and uncollapsing will be achieved by selecting the section name
See above

❓ AC3: Sections will be collapsed by default
Previously there was a task that identified a threshold of 20 sections where above that the TOC would be collapsed, but below, they would be expanded. That looks to be the case. See the Cat Behavior image with less than 20 sections, it by default is expanded. 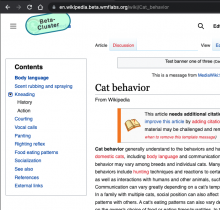 @Jdrewniak You mention clicking the section heading should expand AND collapse here, but the patch suggests it should only expand. Could you clarify here if AC1 is a pass or failure?

❓ AC3: Sections will be collapsed by default

I've updated the AC to reflect the work done in T300973. The sections will/should only be collapsed by default when >= 20 total sections

@bwang sorry, that's a bit confusing. From the screenshots @Edtadros posted AC1 is a pass.

I admit the AC could have been clearer... but it looks to be working from what I can see. Sending it to sign-off.

Test wiki on Patch demo by JDrewniak (WMF) using patch(es) linked to this task was deleted: