As part of the GLAM event, newcomers will create accounts through a specialized landing page. Only accounts created through that page should have the special "Argentina", "Mexico", "Chile" topics available in their topic filter in suggested edits. This is so that other users who are not part of the event do not use up the limited number of suggestions in that special topic. All the events will be in a single campaign and all users in the campaign will see all the special topics.

The organizers will also need a console snippet so that they can turn on this topic in their existing accounts.

The daily limit for image suggestion task should not apply to these users.

Moving to Ready for Development to start generating ideas, even as we still have yet to create the landing pages.

I think we should go with the hack given time and resource constraints.

So, the options would be:

I think we should go with the hack given time and resource constraints.

So, the options would be:

Actually, as we have various code that checks if the user is in the imagerecommendation variant, I think we should continue to use that variant. And we don't need a new user preference, because we have growthexperiments-campaign.

[mediawiki/extensions/GrowthExperiments@master] GLAM event: Show topic for users in the campaign

To opt the user into growth-glam-2022 campaign and to set the variant to imagerecommendation:

[mediawiki/extensions/GrowthExperiments@master] GLAM event: Show CampaignTopic for users in the campaign

Community config (can be discarded when c765349 is merged): diff

Community config (can be discarded when c765349 is merged): diff

@GFontenelle_WMF @MMiller_WMF there are 144 image suggestion tasks for "GLAM Mexico". Do we need a "Mexico extended" topic, just like we had for GLAM Argentina extended? That would provide 4,170 candidates (mexico hasrecommendation:image in the search bar to see what these results look like). 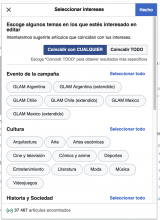