While mobileapps in eqiad has no issues, mobileapps in codfw (where the majority of processings happens because of restbase-async and changeprop being active there by design) is consistently (and at times severely throttled) 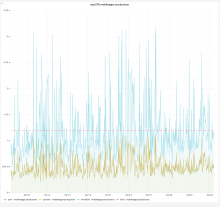 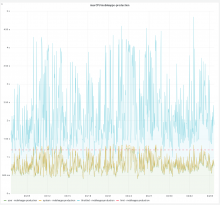 Latencies would quite probably benefit from increase the CPU limits and possibly error rates for the more expensive endpoints too.

After patch was merged and deployed we have happier graphs! 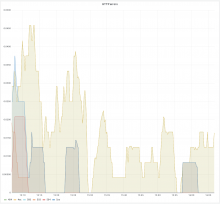 As well as a decrease in some latencies

(arrows pointing to quantiles that seems to have dropped)

For the latencies specifically, it's a bit early to tell with a high degree of confidence, but it is looking good. I 'll have another look in 24h or so.

And now that enough time has passed, indeed the rate of errors is lower (I 've arbitrarily drawn a couple of lines at around the 90+th percentile to showcase it easily. There is also less variation so this isn't exactly scientific, but I 'd say good enough.

We are definitely in a better place.

Latency wise, the p99 doesn't show major improvements although there are some notable ones like /page/summary

The major changes are in p50

where we see /page/talk latency having a very noticeable drop by a factor of ~65%. The rest of the endpoints have minor changes if any at all.

where /page/summary and /page/talk have dropped from a consistently high latency to a more varied distribution with a lower average over time. The majority of the other endpoints see noticeable changes, albeit less pronounced.
akosiaris closed this task as Resolved.Apr 6 2022, 9:09 AM2022-04-06 09:09:07 (UTC+0)
akosiaris added projects: Sustainability (Incident Followup), Wikimedia-Incident.
Comment Actions

I am resolving this followup from https://wikitech.wikimedia.org/wiki/Incident_documentation/2022-03-27_api. This will decrease errors from mobileapps in the future and responses will be given to changeprop more promptly, lowering the amount of retries.