Assigned To
Authored By
Tags
Referenced Files
View All 10 Files
Subscribers
View All 11 Subscribers
Tokens
"Like" token, awarded by alaa.

"the letters in Arabic languages are not placed correctly. Or not connected which makes it hard to read." 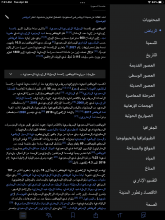 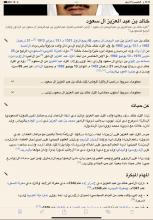 @alaa we're trying to track this down, and are having some trouble. Apologies for my ignorance, but can you help confirm the problem with these screenshots? My understanding of Arabic is that the same letter may be written different depending on whether it is at the start of the word, in the middle, or at the end. Is this the issue that we're having? Or is it something different?

Possibilities of source of issue, and some thoughts

I can replicate while only messing with text size on the article for Crosswords.
I can see a couple characters change when the text size increases and a word gets kicked to the next line.
Arabic letters have different forms depending on where it is in the word. And a letter moves from the middle-position form to the final-position form as the text size increases and the word moves to another line. Which obviously shouldn’t happen.
It doesn’t happen to this word on web.
Also happens on 15.4.1, but not 15.3 or 14.7
On 15.4.1, It does not happen on the output of PCS loaded in Safari on iOS (https://ar.wikipedia.org/api/rest_v1/page/mobile-html/%D9%83%D9%84%D9%85%D8%A7%D8%AA_%D9%85%D8%AA%D9%82%D8%A7%D8%B7%D8%B9%D8%A9). This seems very app specific.

These screen shots are from an iPhone SE (2nd edition) device, running iOS 15.4.1. I cannot replicate on simulator for iPhone 13 Pro running 15.4.

It's from the CSS font-family: Arial found in site.css, in the first part of the file:

Remove this, problem goes away.

This comes directly from https://ar.wikipedia.org/api/rest_v1/data/css/mobile/site, which is in a CSS called by the article's HTML.

This is getting deeper into web stuff than I know, so I think I'm going to hand this off to someone more versed in web.

It's possible there could be a quick fix using .pcs-platform-ios somewhere. But overall, we need to make sure the Ariel font-family isn't what is being used in the body. There may be an on-wiki fix, but I'm not quite sure how this Arabic wiki specific css feeds into PCS.

Removing myself as assignee, as this is out of app's expertise.

I have a problem When trying to read an article in the Wikipedia application, which is that the characters appear disconnected, and for clarification, a picture of the problem has been attached

@MattCleinman CSS rules came from load.php for parsoid output and from https://ar.wikipedia.org/api/rest_v1/data/css/mobile/site for mobileapps ( even for local instance ). Check the shot:

Maybe it is possible to override that font directly in wikipedia-ios?

FYI - styleoverrides.css is where we do a little bit of extra style manipulation in the iOS codebase. Might take some plumbing to only override something for an Arabic article though.

I think I'd rather fix this on wiki or PCS than with a hack the iOS codebase. (In part because the fix will get out their even quicker.)

I will try to test both variants. I already have some results with overridden styleoverrides.css but will test with PSC as well.

And yet another example with overridden and actual fonts: 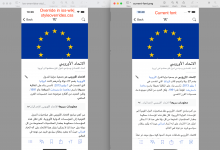 Thanks for this. It fixes the problem and tests great, thank you.

For posterity, a couple risks:

That said, we don't know of any bad outcomes right now - so we're going to merge this in. Thanks for fixing it.

This is fixed in the current beta - if we get additional reports of this, we can explain that we expect to have it fixed in the main app store version soon, and we should share the instructions for joining the beta.

Someone replied to a ticket after updating to 6.9.2, it seems like it is working!! 😍

Two people responded that it was fixed!

Someone replied to a ticket after updating to 6.9.2, it seems like it is working!! 😍