List of steps to reproduce (step by step, including full links if applicable): 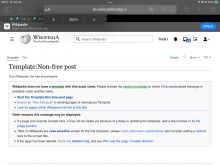 The font-size should scale.

Adding initial-scale=1.0 to the viewport definition may fix this. Please test.

Can be replicated in:

Cannot be replicated in:

Great @FloweyTf thanks for confirming.

Reopening because this change seems to have caused problems for users viewing the desktop site on mobile. See https://en.wikipedia.org/wiki/Wikipedia:Village_pump_(technical)#Search_box_and_default_zoom_messed_up_while_using_desktop_on_mobile

This is becoming a bit whack-a-mole. The reason we added it for Vector 2022 was that we had people complaining that they were seeing the collapsed table of content rather than the one in the sidebar. 🙃

The fundamental problem here is Vector(s) were never made for mobile and browsers default behaviour seems to be inconsistent and these changes show we can't influence that control. I think it makes sense to remove the logic from core for now, and limit any behaviour changes to Vector 2022 going forward given what we've learned.

So here's what's been learned:

Since we are increasing the font size soon, and migrating towards Vector, I'd rather optimize towards the future at this point.

Here's what I'd suggest:

@TheDJ would you be able to (or find someone) who would be willing to start a RFC around whether Vector should be responsive? For those who want the existing behaviour, they would have a user preference to opt out (which already exists in the skin preferences) and they can click "Desktop mode" in browser. There's a demo on https://test.wikipedia.org/wiki/Main_Page - there are a few things to fix regarding heading, but if we had an idea on what the community saw as blockers that would be really helpful.

Without one, browsers will do whatever they want which means the table of contents will disappear on Vector 2022 for users on a mobile device.

Just double checking.. That's because the default (desktop) fallback viewport width on mobile devices is something like 980px and the cutoff for vector-2022 is at 1000px ?

But without if you'll break font scaling on Safari (iPad);

I've been thinking if maybe we should tweet about this issue. I'm seriously wondering if it is a bug or expected behaviour and wether or not there is something we can do about it which we are simply unaware of.

Exactly. This task has been an attempt to reverse engineer what browsers do when no viewport tag is specified and all I can conclude so far is it depends on the browser.

I suppose an alternative is to do browser detection and add the zoom via JavaScript...?

Just a thought.. it might be an idea to try user-scalable=yes without the initial scale.

For what it's worth, the zoomed screen and search bar issue referenced above also happens on Firefox on mobile.

The discussion on the English Wikipedia has been archived: https://en.wikipedia.org/wiki/Wikipedia:Village_pump_(technical)/Archive_199#Search_box_and_default_zoom_messed_up_while_using_desktop_on_mobile