We need to document the process to contribute in our system designing icons. Documentation will be added in the "Contributing" section of the Codex demo.

The following sections in Codex need to be updated:

The process to contribute designing system icons has been documented in this Notion.

@Sarai-WMDE to review this task and provide feedback since this documentation is focused on the design process.

To add this documentation in the Codex demo we should:

@Volker_E After some final touches, this documentation is ready to be published in the section "Contributing design > Designing Icons".

The write-up is available in the same Notion page: Designing Icons.

Here's a compressed folder with all the images used in the file.

@Sarai-WMDE Thanks for all the preparation work. For the future, let's please quickly describe what the image is showing in the file name. We don't know if we gonna adapt the list and suddenly our 3.2.1 image is under 3.2.2. Therefore I've renamed images with descriptions of section and content.

From a readers perspective the step should come first, Notion does a bad job here.

@Volker_E I agree, we could add a start image but I would add instead this other image since the other refers to the guidelines and it's being used in the "2.3. Designing icons" section. I would add this image under the text "The following document outlines..." as I've added in the Notion page.

From a readers perspective the step should come first, Notion does a bad job here.

Possibly also the text and the image in second column

@Volker_E as we commented some days ago, since this section is a numbered list it makes sense to add the numbers and text on the left and the images on the right. I've updated the Notion page with this order. 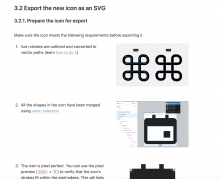 Anyway, I'm not sure if we should add these images in the Codex demo since the images here can't be open in fullscreen and they could be too small if we add them in 2 columns. I think in Notion it makes sense to have more images but I would clean the Codex demo documentation and I would leave just the images that are really necessary.

For this reason, I would explain the 3.2 section with a single image per section:

Make sure the icon meets the following requirements before exporting it:

In order to ensure that the exported icon displays the right filling and empty spaces, you’ll have to use the plugin Fill-Rule-Editor to define the fill rules of the icon’s vector objects.

Export the optimized version of the icon with help from Figma’s SVG Export plugin. This will make sure that the icon code is as small as possible without quality loss.

3.3. Complete the design checklist and notify the developer

@Volker_E I've updated the task description with all the corrections we need to fix in Codex.

@bmartinezcalvo Thanks for the long-form update.
Have incorporated as many changes as possible.

A few things to settle on together:

Have amended the Will/will not with the same treatment we've got on DSG. Let me know if you agree…

@Volker_E design sign-off done for last patch. The design review list items captured in the task have been solved, but one change was missed in this last patch since we moved the "Research & prepare" section before the "Design the icon" in the last Notion update since research should be a step prior to design process.

So the sections of this Designing icons documentation should be the following now:

Other things I found that we should update:

@Volker_E for the columns in this section I think is ok if we use 50% for text and 50% for images (as we have in the last patch).

@Volker_E I already reviewed the last patch and commented here with some things that we should update in the "Designing icons" documentation in the Codex demo. I added them as list items in the "Design Review" section in the task. So moving the task to Ready for development so you can fix them.

@bmartinezcalvo If we make “Research and prepare” a top-level headline, we should move it to 1.
That would also align our structure with the general Product flywheel structure and also take off possible burden from designers (don't start just with blank Phab task that would get declined anyways).

@bmartinezcalvo On the "The standard icon size is 20px, but 16px and 12px variants are possible." – We quickly discussed in one design sync to leave the 12px variant in our code base but not talk about it as it's a usability flaw.

@bmartinezcalvo On the "The standard icon size is 20px, but 16px and 12px variants are possible." – We quickly discussed in one design sync to leave the 12px variant in our code base but not talk about it as it's a usability flaw.

@Volker_E then I would delete that message "The standard icon size is 20px, but 16px size is possible..." to avoid confusions. If our base icon size is 20px let's talk about it in our guidelines. Also, 16px size will be used at the moment for so specific use cases so I wouldn't comment about it in our guidelines since users could think that 16px is one of our usual icon sizes.

@Volker_E all looks good to me except 2 things:

@Volker_E all looks good to me except 2 things:

@Volker_E created this new task T325055 to increase the padding between sections in Codex, so the second corrections would not be needed in this task.

Design sign-off done. All looks good to me!

Test wiki on Patch demo by ATomasevich (WMF) using patch(es) linked to this task was deleted:

Moving this for sign-off.