Steps to replicate the issue (include links if applicable):
When testing out the Realtime process for UK Wikipedia, I encountered a problem.

I can reproduce with regular preview, too. I believe it may be a styling issue with the infobox itself. If I remove the float: right property the scrollbar appears as expected. I've tested this on English Wikipedia as well.

I don't think this is an issue with Realtime Preview, specifically. I suggest we close as invalid unless we see a real-world example of where this is an issue. Even if we do identify one, I'm not sure how to fix it... RTP should be able to handle overflowed content just fine. It's the CSS of the content itself that seems to be the problem.

@MusikAnimal @NRodriguez I find that if I am editing an LTR wiki in an RTL interface language, I come across this issue more frequently.

This example is using a plain mediawiki table, so there should be no unusual CSS, https://en.wikipedia.org/w/index.php?title=Apollo_program&action=edit&section=31&uselang=he 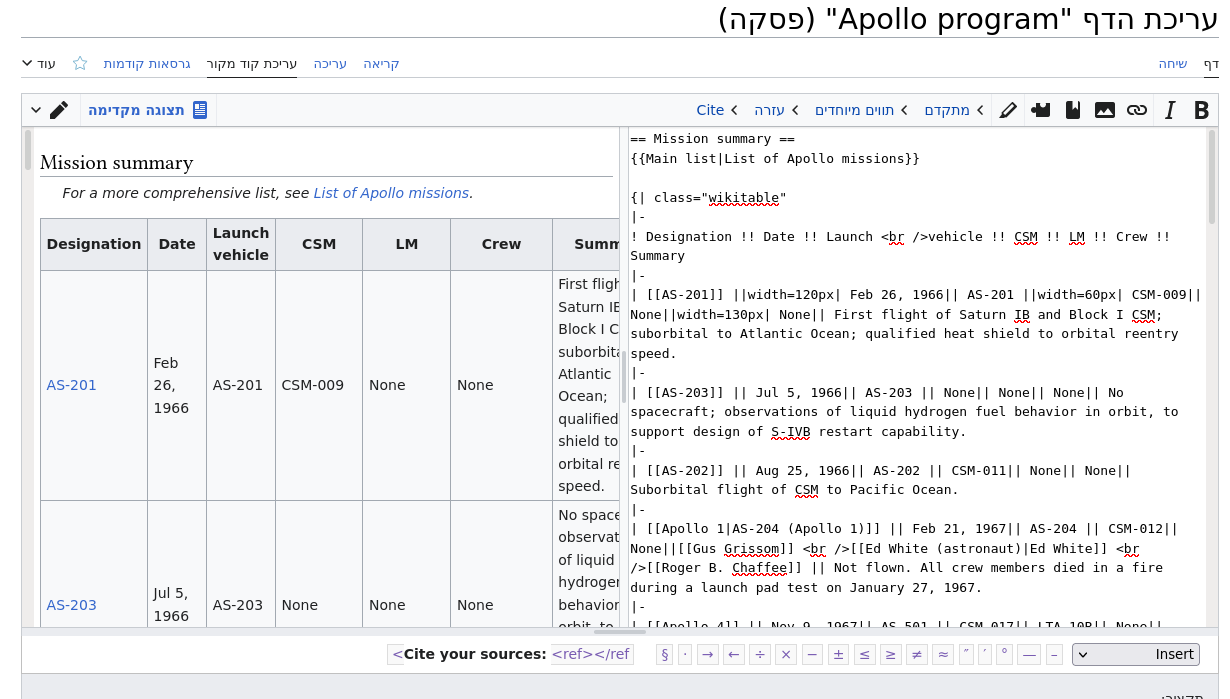 The horizontal scroll does appear if I edit the same article in an LTR interface language.

Similarly, the horizontal scroll appears if editing an RTL wiki in an RTL interface language but does not appear if in an LTR interface language (e.g. https://he.wiktionary.beta.wmflabs.org/w/index.php?title=Phonos&action=edit&uselang=en)

I don't know how common it is for someone to edit, for example, Hebrew Wikipedia in English or English Wikipedia in Hebrew.

Moreover, it seems possible to have on an LTR wiki specific articles which have an RTL page language (see for example https://en.wikipedia.org/w/index.php?title=MediaWiki:Deletedtext/ar&action=edit)

@MusikAnimal @NRodriguez I find that if I am editing an LTR wiki in an RTL interface language, I come across this issue more frequently.

Interesting! This is valid, but still expected, I believe. I am able to reproduce using the normal preview too with a narrow screen. In this case, I had to add a overflow: scroll to the #wikiPreview element to make the scollbar appear (which is MW Core, not Realtime Preview). I assume there's a reason that CSS rule wasn't added, but either way it's unrelated to RTP. Editing in English with a narrow window does show the scrollbar as expected, so that further tells me this is probably an outside issue.

I don't know how common it is for someone to edit, for example, Hebrew Wikipedia in English or English Wikipedia in Hebrew.

Probably decently common for those whose native tongue is a RTL language, especially at Meta where there are many English-only pages. But I imagine they are used to little issues like this. For example, mw:Manual:Database layout (which has a huge table) used to scroll with the entire page. If you viewed it in an RTL interface, you get no scrollbar at all, and this is just viewing the page, let alone editing/previewing it.

My suggestion for now I guess is to see if we get this complaint from users before we look more into it. Another thing worth mentioning is that unusually wide content, especially tables, probably aren't well-suited for RTP to begin with, just like they aren't on mobile screens, etc.