Goes into the attribute <mapframe lang="…"> (don’t forget the special case “local”)
We can reuse the existing list of languages in the "..." dialog. 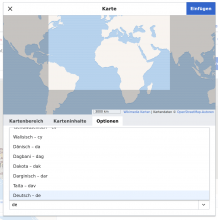 @ECohen_WMDE Currently the code actually reads the default language of the wiki and selects it from the list. Should we keep that behaviour or would you prefer removing it and displaying the placeholder?

Oh looks like it is a bit more complicated. This is what is happening now:

Updates the task based on our conversation, will also update the help text now in the other ticket to reflect the changes

@ECohen_WMDE In contrast to the existing language search field, the one specified in the ticket is only allowing a prefix search. So depending on how we order the language names and codes you can only search for one of them. Is that what we want or should we maybe look for another solution that allows infix search?

@lilients_WMDE I think if the ordering is with the language name first and code following (as specified), the prefix search is acceptable. Infix search might be more ideal but I don't think it's a reason to choose a different component. I'm guessing there is no option for infix with combobox?

While reviewing the patch, I realized that there's currently no entry for local in the ComboBox. I wonder if we should add an extra option in the dropdown that's either just empty ( because setting nothing falls back to the default local ). Or even add something that matches the local setting with some text like Set language to geo location.

because setting nothing falls back to the default local

I don't think local is the default. It should be the content language of the current wiki, which is why this option is preselected. So I wouldn't add any empty option.

Good point! I considered adding it to the list, but then thought that since it's a combobox, they can simply write in local if they like. I also thought it might be unclear without more context. I like the idea of adding extra text though and including it would make it clear that it's an 'official' option and make it more discoverable.

I would add it to the bottom of the list (though if they start to write it, it would show up from the filter). I think it should still include the term local though in case people are already familiar with it. Maybe local (use language of map area)?

To clarify though: I think this is a nice to have. I've added it to the help text, so if this doesn't work for some reason, then the option to use local is still covered in some way.

The more I look at this feature, the more skeptical I am that anyone wants to set a specific language. The default (page/wiki content language) is correct for most uses, and the only other valid use case I can imagine is that an editor wants to display labels in the "local" language. Do we have any examples where lang= is used to set the map to show a third language? Generally we go to great lengths to never show "untranslated" (non-content-language) text to readers.

I think we could replace this whole thing by a single checkbox for "show in local / regional language". Perhaps the "..." button and dialog was an intentional design choice, meant to hide the field from unnecessary setting?

Also, if we do show the language combo box, I think that language code search is necessary. This is after all the value that will go into the wikitext.

Should be merged after next week's branch cut.

Also, I disagree with the decision to use the local labels but that's not really my business (meaning, I'm not responsible for editing and maintaining this content).

Fisch made the great suggestion to add a configured mode in which all maps appear with labels in both the content language and the local language, together.

UPDATE: seems to be unrelated to our work.

Not strictly needed any more

Follow up: "local" gets translated, which is incorrect because the option only works if the exact English keyword is entered. Change the text to:

"local" as a keyword should be included in a way that makes it untranslateable.

[mediawiki/extensions/Kartographer@master] Making sure local does not get translated

[mediawiki/extensions/Kartographer@master] Making sure local does not get translated