There is not color-highlighting of buttons in Monobook-skin. Features should be consistent between different skins.

Mentioned Here
T100270: Replace use of jQuery UI and MW UI with OOUI across all Wikimedia-deployed extensions and core
T203696: Drastically reduce the number of ResourceLoader modules that WikibaseClient registers
T226976: Convert linkitem module away from jQuery UI

The Vector theme for jQuery UI changes the color from light grey to dark grey on hover for normal buttons. And from blue to darker blue in .ui-button-blue definition.

The Default jQuery UI theme (there is no "Monobook-skin button" there is jQuery UI default's theme from upstream and a custom theme for Vector) does the same, except that it has no ".ui-button-blue" declaration.

The default jQuery UI theme (used in all skins other than Vector) also change the color from light grey to dark grey on hover for normal buttons.

What is the bug?

(In reply to comment #1)
First changing the title of this bug to something different and then asking what the bug is, is inacceptable behaviour.

It was *not* about hovering. It was about the blue color of the button in vector and that this color is not present in other skins.

When you e.g. design JS-applications using vector by default and make a green OK-button and a red cancel-button or similar, as a usability improvement, you are surprised when testing with other skins that there's no such "colour-highlighting". If I would have meant hovering, I would have written so or used the term "onmouseover".

Hold your horses. All I did is:

Now, as for these color classes. The reason they are not in other skins is because they are not standard jQuery UI classes. So jQuery UI themes (including the Default, Sunny, Redmond, Smoothness theme etc.) don't define this class.

Trevor invented it back in 2011 and added[1] it as a hack in the jquery.ui/vector theme directory. We need to either:

I feel like replacing the default with rectangles. (Taking bug for reals now.)

Rainier, given that Vector is moving towards using these styles: http://tools.wmflabs.org/styleguide/desktop/section-2.html

Should Monobook (and other skins) match that?

The important thing is that the intentions developers usually had using colors are reflected in all skins. Whether it is the use of colors in these skins or the use of thicker borders, font or any other style - if it fits better into this skin - doesn't matter a lot.

I however can imagine that .ui-button-green and friends have been used not only to signal one discrete intention/meaning. Therefore the easiest option I could imagine would be going with your suggestion #1 - match the .mw-ui* styles.

@matmarex @Krinkle is this one from 2012 still relevant? I thought we nuked jquery.ui.
I think this should be declined right?

I thought we nuked jquery.ui.

The migration cost for existing scripts to OOUI or native HTML are quite high. I wish it would be easier.

jQuery UI is still in use, for example in the Wikibase "Add links" inteface: 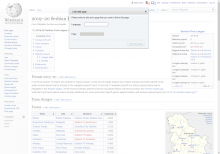 This specific task is irrelevant for future work. We're not going to work on such any time projected because jQuery UI is deprecated and is stated to be replaced. See T100270: Replace use of jQuery UI and MW UI with OOUI across all Wikimedia-deployed extensions and core for more.