Assigned To
Authored By
Tags
Referenced Files
None
Subscribers

If I add indent to any list item, it breaks.

The indented line gets moved to the end of the previous line.

The live-changes looks as it is working properly, but the edit-diff (preview your changes) always shows it as broken. (See attachment) 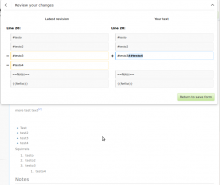 This appears to be a (new?) bug in Parsoid -

Unless we're breaking something in VisualEditor somehow?

Can you provide the HTML the VE sends?

I'm guessing that VE emits the wrong HTML here, so reassigning to VE. Please move to Parsoid again if the VE HTML is sane.

Looks like Parsoid serializer is newline sensitive in this case:

This is not a new bug. This has been around for a long time. I went back to commits almost 3 months back and tested.