Hi I am from sa.wikipedia. I am a editor of that project. From some months there are some problem we facing. I hope in that you will help me.

This problem may be small front of you. For us it is the main problem to manage wikipedia. because every new users are doing same mistake all the time. and we have to remove that or rename that in same time. Some users are writing so many pages and in all they made this only mistake. so how long we have to follow the new users and before we know they write so much then who will correct that?

If you have so many works and some important works only you are doing so please please do this work first. because daily a new user doing same mistake. Thank you...

you can talk with me on this

Thanks for your bug report!

I don't see any changes in the transliteration keyboard. Neither upstream, nor local. So I'm not sure that I understand what is this bug about.

When did it change? 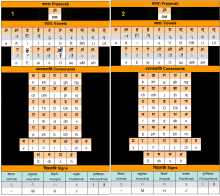 Thanks for the attachment, Nehal.

This chart has two sides: 1 and 2. Which side should be on the Sanskrit Wikipedia?

left side on top there is 1 in yellow color and right side 2 in yellow
color...

OK, but which one should be used in the Sanskrit Wikipedia?

sorry I am explaining in detail.

Please after 19/4 talk with Shubha

NehalDaveND: You are welcome to CC Shubha here on this ticket.

Isn't this report about ULS? Why is it in the MediaWiki → Internationalization component?

Here is the link to the exact discussion about this matter in the sa.wikipedia -

Hi I want to know that is there any programming fault or other please inform me... Thank you for help...

I don't understand what what you want to say? please elaborate ?

No blockers - it's just that all of us were traveling. I hope to do it some time soon.

We need help with the suggestions that have been given to us on Bugzilla and on the Talk page.

As per Nehal's suggestion on Bugzilla[1], the mapping should be:

and the Talk page [2] suggests:

Please note there are discrepancies in the characters suggested for E, O and also the additional characters on 'ai' and 'au'. Can someone please give us a very specific list of characters and the keys on which they are to be mapped.

I am explaining to you this. ऒ ऎ etc.. useless in sanskrit language. but some time adopting english words like Dr. we can write डॉ that's why I wrote that. That is for usefull for every one. Thank you for helping...

As per comment #9 you mention that the mappings as per the image on the left is to be used. So to confirm, you are asking for the mapping to be:

Please let me know so that I can make the changes and prepare it for testing. Thanks.

I just want to make one thing clear here.
For ai you have mentioned ऎ - may be by mistake. It is ऐ (that the line above must be straight.)
Hope my words are clear. Thanks.

Hi there is ready script for testing?

The changes are ready for testing here: http://imetesting.wmflabs.org/jquery.ime/examples/

I have seen and use this script. First of all thank you for help. This is very important for sa.wikipedia. In this script every thing is good, but I want some more changes in this script like ज्ञ त्र क्ष श्र द्य I want to add on number keys or symbol keys. so today before 3 p.m. I will tell you were we want to change. Once again thank you...

Hi Runaji, I want to inform you that test script is accepted by other user also. so we can apply this script on sa.wikipedia. but before that I want more help from you. We sa.wikipedia editors and admin want add shortcut keys of ज्ञ त्र क्ष श्र in our script. If this is possible, then please do for us those changes. you can see here for more detail...

Please confirm if the following 5 are the only mappings that have been supported in the discussion at sa.wikipedia:

are there any other rule changes that are required?

no there are no other rules for us... this is ultimate thing which we want... Thank you..

we want this change definitely. But there is some more changes ...

Sorry previous one was half....

we want these changes definitely. But there is some more changes ...

Please test and confirm if the changes look ok:

I have test this and thank you for do this for us. some more changes are there ...

Here I want to make one thing clear. Community discussion is still going on regarding keyboard changes. Everyone is rethinking about all the required changes.

Therefore as of now please make only the changes regarding ए and ओ for which community has fully supported. Please see here

Sorry for this unwanted previous comment. I want to clear here please keep changes community will give answer so shortly. After that I will tell you everything in detail. see here for more positive comments. Thank you for help..

This ticket is a bit hard to follow, due to several "And please also change something more" comments. If possible, please gather very clear community feedback on the exact changes wanted, and then post one complete comment here listing and explaining all these changes. Thanks for your understanding!

sorry that is my mistake. my English is not so good some time my sentences are so bad but after this I will make sure for that proper word use.
After community decides we will write here prober needs our. Sorry again and thank you for help....

Hi there are some different opinions in our community. so please do more changes for this script. now there is k+ = क़् can type but if after this क़् you type a than it becames क़्अ which is wrong. If after k+ type if someone type a than word should be क़ . so please change regarding this problem.

After you will change this, than our community will be clear for other change. Our all opinions are based on this change. after this change we have not to discuss so much and ultimate decision will be taken by community.

sorry for this trouble but after this change most problems will be destroyed regarding script layout. Thank you for help...

I am very confused now about what the community wants and what is being asked by Nehal.

Shubha/Nehal, can you please confirm if the only changes request right now are the following and nothing else?

If that is an yes, then I recommend that this bug be closed with this change and a new bug opened when the community reaches an agreement and has a final list of changes that they want. Thanks

Runaji,
I am really sorry for all that has happened here.
The answer for your question is YES.
Please do the above change and close this.
Thanks a lot for your patience and kindness.

Can be seen here: http://imetesting.wmflabs.org/jquery.ime/examples/

For all the other changes that Nehal is putting together, I request a new bug to be created so that the current changes can be merged and made available for use without delay.

New pull request after review of the earlier by Kartik Mistry:

Runaji we used this script on http://imetesting.wmflabs.org/jquery.ime/examples/ this place. Thank you for help. Please guide us how it can be implement on sa.wikipedia...

Change 135738 had a related patch set uploaded by KartikMistry:
Update jquery.ime from upstream

Hi ! I think you updated script but we can't use that on sa.wikipedia.org so please guide us for implementation that script thank you.......