screenshot - before and after Preview

Split from T69192: The message Flow-preview-warning is too technical:

Why is Flow hiding the text area when you're previewing a comment, and
replacing it with a huge green message bubble? That's confusing. Please just
do the normal MediaWiki thing for this and no complicated explanations will
be necessary.

I'll attach a screenshot from http://en.wikipedia.beta.wmflabs.org/wiki/Talk:Flow

I think this is an interesting new experiment. It reminds me of Slashdot comments, where one can only Edit OR Preview, but not both at the same time. (eg. try previewing a test reply at http://ask.slashdot.org/story/14/06/27/1957239/ )

The normal MediaWiki thing, is to use the message:
[[MediaWiki:Previewnote]]
and then show the previewed text
and then show the edit box,
[Which enables us to both Preview and Edit the wikitext simultaneously.]

The downsides of the normal MediaWiki thing, which I believe this experiment is trying to solve, are that it:

The downsides of the new experiment are:

(Sidenote: I use the UserScript https://en.wikipedia.org/wiki/User:Js/ajaxPreview which makes previewing especially fast, and solves the whole Regular-Preview problem of "Refreshes the entire page, and moves you to #Top".)

I would suggest returning to the normal preview-method. (Especially because the javascript version currently on mediawiki.org/enwiki seem to use something akin to the ajaxPreview, which is nice and fast and non-jarring. (albeit needs aethetic updates))
Then also, place the standard [[MediaWiki:Previewnote]] message in a tooltip at the side, next to the "reply" button. That will provide less inline-text to distract someone whilst they're composing a post. (and less new messages to translate! cf. the original bug)
But I'm willing to be convinced otherwise. :) 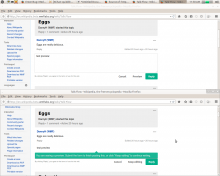 Duplicates Merged Here
T100996: Unable to see both the wikitext and the HTML preview on Flow pages

Yeah, this is something we should look at. Thanks for bringing it up!

Another downside to the new experiment:

I think someone accidentally partially fixed this, because today at mediawiki, I'm getting:

Since this ticket was filed, we enabled VE in the Flow message fields. The VE field now serves as a preview for wikitext.

This is much faster than a normal wikitext preview, with no extra page loads. It would be redundant to build an extra preview box.