When creating a new page, suggest doing a translation instead
Closed, DuplicatePublic
Actions

Assigned To
None
Authored By
Tags
Referenced Files
Subscribers
View All 10 Subscribers
Tokens
"Like" token, awarded by Ricordisamoa.

When the user is about to create a new article from scratch, the user may be interested in knowing whether the article can be created as a translation. We can provide such option to make the process faster.

The basic idea is illustrated in this mockup:

Figuring out which article is the user trying to create is not easy (more on this later). While a mechanism for doing so is not implemented, we can show a generic message just to announce the feature as an alternative to creating articles:

This should be only a temporary measure, since it may generate unmet expectations.

Figuring out which article the user is creating

The main challenge is to figure out which article is the using trying to create (to be able to find t in other languages). There are some possible strategies to figure that out:

We should also figure out how this fits together with https://www.wikidata.org/wiki/Wikidata:Article_placeholder_input best.

I illustrated a possible solution in two prototypes (try searching for "pink parrot" and creating a new article): 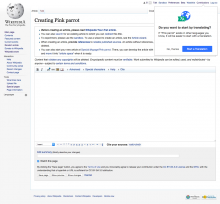 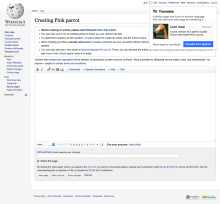 After some iterations by @Nirzar and some adjustments I made on top of those, I think we have final version:

I'll add the mockups to the ticket description to reflect the latest status.

@Pginer-WMF, Can't we show this CTA only when we have some confidence score to show suggestion and leave all other cases? Does not look a thing to show "always" in a new article page to me

@santhosh that is the idea of the design.
I just included an alternative in the case we don't have a way to have such confidence score and we still want to support this. What I think it should be properly discussed and evaluated before proceeding that way.

If we consider that having such score is a must for the task, I can remove any info on alternatives to avoid any confusion.

Change 203618 had a related patch set uploaded (by Amire80):
Show an invitation to translate an article instead of creating

Hi, new here—might be something basic I don't understand :-)

I'm trying to grasp why you want this CTA to be fixed to the Contributions menu instead of just putting it into the newarticletext box together with the rest of the initial guidelines to the user. Without fully understanding the vision (yet) for content translation, I would have thought that CTA should be immediately visible on e.g.

...and not only via click/hover/touch on Contributions. Maybe both is being worked on and this is just an additional way to prompt the user to translate instead of creating?

Change 203618 merged by jenkins-bot:
Show an invitation to translate an article instead of creating

@rasmusskjoldan thanks for your comments, here is some additional details:

One of the problems we identified in our tests is that when users enabled the beta feature, it was not clear where to find the main entry point to start or continue with translations. So we want to establish contributions as the entry point where users go to create new contributions such as translations (in addition to checking what they did as it currently supports).

For the particular case of this entry point, we tested two initial prototypes (on both you need to try to search for "empanadas" and create the page if it does not exist): one adding a banner above the content, and the other using a modal.

We found issues in both, the first one pushed the text area down which is the main element to edit. Existing templates also contributed to that but those are controlled by the community and we cannot do much more than trying to avoid making instruction heavier.
The modal version was perceived as more clear but it felt too blocking. It was hard to evaluate what to do if you cannot view all the information (and after closing the modal it was hard to revert your decision and figure out how to start a translation).

As a result we decided to use a flyout similar to what we used to invite users to try the beta feature in T89701. The goal in this case was to suggest you to translate the specific article you were about to create. If we achieve that (or a good enough guess) the plan is to show the popover immediately visible to invite the user to translate the article instead of starting from scratch.
If we are not able to figure out which article the user is trying to create, inviting to translate can result in unmet expectations (e.g., the article not available in a language the user can translate from) and I'm concerned in showing it immediately visible every single time (showing it once as we do for T89701 can be acceptable).

Change 210667 had a related patch set uploaded (by Amire80):
Show an invitation to translate a new article in VE, too

Change 210667 merged by jenkins-bot:
Show an invitation to translate a new article in VE, too

Second part of the story is to be done later.