Assigned To
None
Authored By
Tags
Subscribers
View All 13 Subscribers

Priorities "Unbreak now!" and "Needs Triage" currently have the colors indigo and violet, respectively. These two colors don't differ very much and can cause confusion.

Mentioned In
T202074: Phabricator feature request: As a colorblind user responsible for prioritization, I would like a way to differentiate tasks by priority on a project workboard that doesn't rely on colors.
Mentioned Here
T108142: Next Phabricator Upgrade: on 2015-08-26

Duplicates Merged Here
T202074: Phabricator feature request: As a colorblind user responsible for prioritization, I would like a way to differentiate tasks by priority on a project workboard that doesn't rely on colors.
T115367: Unbreak Now color is almost the same as Needs Triage
T111964: "Unbreak Now!" task colour is not colourful enough
T109808: Unbreak Now and Needs Triage colours are too close 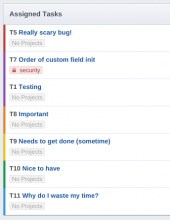 Are there real examples of "confusion" or is this hypothetical?

Asking as this is the first time I see the colors being brought up, after using Phab for four months with >700 active users per month.

I don't think we have a problem of colors either, but what is more important is that discussing colors here is probably rather pointless. Upstream has strong opinions about their UI. If you convince them, it will happen. If you don't convince them, we will not fork Phabricator here for this.

No feedback from reporter => declining

Fixed in upstream by using pink for "Unbreak Now" priority instead of indigo.

This doesn't seem to be resolved, despite the latest deployment.

Nevermind, the upstream fix just changed the default, it was only a matter of changing configuration on our instance to resolve this.

@Qgil: This is a very real problem. Twice this week, I have looked at a column and thought the top items were simply needs-triage, but in reality most were that, but one was unbreak now. I haven't reported it earlier because there are very few unbreak now tickets on our boards. When they appear, they should JUMP OUT AT YOU, not be hidden.

I generally agree with @Negative24's proposal above, but I understand that it's a big change, and would be likely to result in endless bikeshedding.

So my proposal would be to leave unbreak now as it is, and simply change needs-triage to something else. ANY color that is visually distinct from all the other colors. Grey is available, and has connotations of neutrality, which fit well with a task that hasn't yet been prioritized.

Oh, and this is definitely not "resolved". Pink, if that's what it is, has not solved the problem. 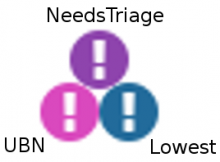 Reopening because I think @ksmith has a point here. But, to counter that, I don't think that grey is quite appropriate because "needs triage" isn't exactly neutral priority, phabricator priorities look like

Needs triage could be less saturated and darker perhaps? A small adjustment might be all that's needed. It's definitely harder to tell on a workboard than the task list. I tend to use maniphest task search much more than workboards.

So we can choose between this colours in configuration:

I think we can choose something like grey for needs triage, it has not a priority yet, so kind of not coloured. What do you think?

Upstream ticket https://secure.phabricator.com/T9237 is closed by using pink for "Unbreak Now" priority instead of indigo.

I'd propose to use grey for lowest.

I'd say the current difference between UBN and Lowest is sufficient when looking at lists of results, hence boldly declining.

Note that on workboards, one can also group by priority by changing " Natural" to " Group by Priority" in the upper right corner.