Visit http://localhost:8888/w/index.php?title=Headings&article_action=add_to_collection&mobileaction=beta
Add/remove the page from your Watchlist
The content overlay will confusingly reopen
Only happens for Watchlist... 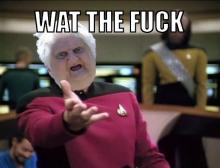 Seriously though, shouldn't the options object always be the same as this.options? What's going on?

Forgive my stupidity, but I still don't quite understand what's going on here. Context: I came here by way of the byref patch that you submitted.

@phuedx no problems - it's really subtle and I'm confused now trying to explain it. So in render we were basically cloning options and then adding the newly passed parameters.

This became problematic in https://gerrit.wikimedia.org/r/#/c/203842/3/resources/ext.gather.watchstar/CollectionsWatchstar.js as postRender needs to changes the current state of CollectionsWatchstar - it deletes an entry from the options parameter - which is sometimes this.options and sometimes an arbitary object. In L163 of that patch we just call render without any arguments which is why we were hitting this problem

Thanks for the clarification @Jdlrobson.

@Jdlrobson this is resolved, but appears to have caused a new bug: T97268