Assigned To
Authored By
Tags
Subscribers
View All 12 Subscribers

Mentioned In
rOMWC4b97eac230a8: Add config for Wikisource badges on Wikidata

The badges needed for Wikisource are:

Can they be enabled and imported?

Yes :) It's in this sprint so should happen over the next 2 weeks.

"Featured text" would be one that English Wikisource would utilise and has a long history of use, and equates with the FA componentry of the WPs. Iit would be used to add components to an article.

@micru @Billinghurst we need some icons for the badges on Wikidata. Do you have any suggestions?

@aude you can use the same badge but with the colors of page status used in Wikisource:

To me it is the colour scheme that is important, and then a steady image for the status of the work, so Micru's suggestion works for me, not that I am aware of the badge itself.

For a featured status enWS has been using [[File:cscr-featured.svg]] if you need a specific image

this is in progress in https://github.com/wmde/Wikidata.org/pull/25

The patch is merged, anything else needed?

configuration still needs to be done

Meaning? A set of specific icons for use? Someone/some group to nominate?

Change 229062 had a related patch set uploaded (by Aude):
Add config for Wikisource badges on Wikidata

@Billinghurst in the clients, we can specify a default icon for each status to appear next to interwiki links. (e.g. like the featured article stars)

For Wikisource, maybe it would be these percentage indicator icons? https://commons.wikimedia.org/wiki/Wikisource#Text_development

There also will be a css class added for each interwiki link that local Wikisource communities can use to customize or set a different icon.

@Billinghurst in the clients, we can specify a default icon for each status to appear next to interwiki links. (e.g. like the featured article stars)

For Wikisource, maybe it would be these percentage indicator icons? https://commons.wikimedia.org/wiki/Wikisource#Text_development

There also will be a css class added for each interwiki link that local Wikisource communities can use to customize or set a different icon.

Works supported by scans, and there are three basic states

Works not supported by scans

To me, I would only be looking to generate those marked (&&) as an initial phase as I believe that they are accepted across all the WS, though happy to hear argument to the contrary (@micru @Aubrey).

&&4 has been tossed around, though I would argue that it is the same as &&3 and should be GREEN.

If you want to keep it simple, just use coloured dots, and we can substitute in community-approved icons. The colours appear as ribbons above works, so usually mean something to the community. 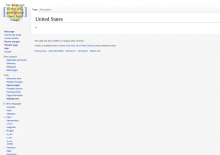 I didn't add one yet for "Digital documents". If we want that, we need to also add it in the repo configuration, etc. also.

it's also possible to have no default badge icons in the sidebar. (but still have the css classes for each link that has a badge)

I think we should proceed with no default icons in the clients and the configuration change that sets the badge item numbers.

unless no objections, how about we deploy the config change tomorrow?

ok.... i am stuck at the airport and not coming into the office today.

We have a deploy window tomorrow (Wednesday) for arbitrary access and can do this as well then.

Can you tell me (or point out some documentation) on how I now use this at Wikisource to populate an icon for a featured text, etc. At the moment at enWS we utilise a template {{featured}}. I am not sure whether we now link that template to the field against the wikilink or what. Thanks.

also, the default badges are ready to deploy with this week's deployment, for the sidebar.

@Billinghurst I have added some documentation at https://www.wikidata.org/wiki/Help:Badges for how to customize the icons in the sidebar. (the page still needs to be marked for translation)

I am not entirely sure this answers your question and not sure I understand what you mean about the {{featured}} template? That adds the star in the upper right corner of the page, in the "page indicators" area. Do you want to replace that with something using Wikidata? (e.g. setting the page indicator)

[I will try and take my nuff-nuff questions off-phab, as maybe it is about my expectations, and I will have a look to see how the WPs handle these matters.] Yes, I am wishing to automate as much as possible out of Wikidata in presentation terms. The community is discussing pulling more data from WD for our header templates, and just need to find someone LUA proficient to guide us.

As I will now have a few thousand works to update their proofread status, I had a look at Widar stuff to see how I might be able to utilise it to do the badge statuses. I couldn't work out which bits to utilise update the claims against the interwikis, and don't see it mentioned on the help pages. Can you please give some direction on that matter. Thanks.