Come up with an abstract deployment model that roughly addresses the needs of existing projects
Closed, ResolvedPublic
Actions

Working from the bottom-up we will try to identify the high-level details of a system that would meet the needs of services projects as well as mediawiki and phabricator deployments.

Some situations that we probably need to explicitly deal with:

@fgiunchedi: if you have anything to add, please add your thoughts on requirements for sentry deployments

sure, context is https://gerrit.wikimedia.org/r/#/c/201006/ where a python virtualenv is shipped in git, also note that sentry isn't currently deployed but it'll likely be in the future.

One big problem I see ATM is that python virtualenv --relocatable doesn't really work in practice (https://virtualenv.pypa.io/en/latest/userguide.html#making-environments-relocatable) so the path has to be the same in both build host and runtime host

general points I've identified while looking at the code review, mostly on the 'deploy working code onto machines' side of things, rather than deployment policies/mechanics themselves

Here's my attempt at diagramming the process as a sequence diagram. 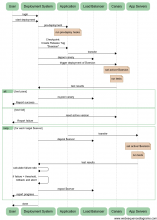 see P709 for the source code