@Bstorm the maps-warper3 server should recover fine from a reboot, and having the NFS offline for a bit. Many thanks in advance for your work!

Had a look. I think it's because of the colorspace in the image. There's a known bug with greyscale or paletted images.

Resolved. Have just deleted the old maps-warper2 instance as everything's been running okay for a while.

I have shut down the maps-warper2 instance

I've removed the warper-old proxy. and shut off the maps-warper2 instance. I'd like to keep it around for a week or so before deletion though.

@Chippyy can you please document the setup somewhere for the future ? That would be super helpful.

maps-warper2 has been migrated to maps-warper3 and web proxy (warper.wmflabs.org) switched too, with everything seeming to work okay, but I'd like at least a day before we turn off the old instance just in case...

I think all the logrotate and the crontabs are copied across also. Wouldn't mind a day before we remove the warper-old proxy and then we can turn off the old instance.

for the record. https://phabricator.wikimedia.org/T208406 is relevant to maps-warper3 instance as we store around 230G worth of images in /home/warperdata

Chippyy added a comment to T208406: Check whether maps project requires NFS or not.

I think it's inevitable that it will exceed the 300G space in less than a year as more maps and images get added, so maybe a custom one would be better.

Info about the maps-warper2 instance. it is soon to be replaced by maps-warper3 running Debian Stretch.
The maps project usage for this instance is to 1) to store about 230G of processed map images, 2) image thumbnails from the application (~600mb) 3) application database backups (~2G) and 4) the instance (and I imagine other maps instances?) has it's /home directory mapped to /mnt/nfs/labstore1003-maps/home/
In the old labs situation it had issues with running out of disk space, and hardware disk failures of additional local disks. I think using the project store to keep data was used after that in 2015.
This runs the http://warper.wmflabs.org/ application, started in 2014 and is separate from the old and new OSM work.
I think it would be okay for this the warper to run from an attached disk assuming it has enough space for all the existing and future additional map (let alone having /home on nfs is bonkers tho) It would be nice to have an off instance backup location.

Chippyy added a comment to T211149: Ubuntu to Debian migration for maps-warper2 instance of the wikimaps warper .

Old instance is now in new location (for neutron) and site is working as before.

Chippyy added a comment to T211149: Ubuntu to Debian migration for maps-warper2 instance of the wikimaps warper .

Watch out for downtime due to: https://phabricator.wikimedia.org/phame/post/view/120/neutron_is_here/

Okay, so after the 18th of December, the instance won't be deleted? But when the Ubuntu Trusty LTS EOL happens, it probably will be... and it's likely that the Puppet code will force that change to happen before then? So we don't have any firm timescales of when the switch is being pulled (before April 2019) but 18th Dec is to see which ones are not being used and can safely be switched off?

...I am not making a declaration that you must jump over to Debian for this task, but this is something for folks to be aware of.

maps-warper2.maps.eqiad.wmflabs is still actively in use. I can fit in some time to upgrade before the deadline but I'm not sure how easy it would be to upgrade to Debian (if at all). Also unknown if the software which has only been tested in Ubuntu environment would work on Debian without significant development time. What are my options?

Chippyy added a comment to T194395: Rectification failure after adding a map and giving it six control points.

Hi, many thanks for this bug report.

maps-warper has been deleted now.

It's been a couple of days, so I have stopped the old maps-warper instance.

Okay I think the new instance should be working fine now. I'll announce it to the main users and see if any issues crop up. If alls good we can turn off the old instance in the next couple of days

This was installed via:

Having trouble installing libgdal-dev because of wikimedia repository choosing the older 4.8

@Andrew Thanks for keeping an eye out for this - I am planning on working on the majority of this task this week. And will be updating this task as I go along.

Done - Create maps-warper2 instance (m1.large). This has a better and larger setup for its root partition mainly ensuring the instance doesn't get hosed due to full logs anymore!

@Tgr Thanks, have updated the secret key and I was successfully able to call the API via Oauth! Seems all fixed now!

copying to github and marking as resolved (It current expected behaviour and not a bug, and I'm not sure that this is a desired feature)

copying to github and marking as resolved. Many thanks

I believe this is fixed now, marking as resolved.

Chippyy added a comment to T126316: Catchable fatal error: Argument 3 to hash_hmac() must be of type ?string, bool given in /srv/mediawiki/php-master/includes/utils/MWCryptHash.php on line 108.

if this helps finding the cause, on commons.wikimedia.beta.wmflabs.org I'm seeing this, or a similiar error in the response body when calling the API via OAuth "Argument 3 to hash_hmac() must be of type ?string, bool given"

I installed a new version of Passenger (Apache mod which runs Rails apps) and bumped up the timeout time.
So it takes 1-2 mins to start the application and once the app is running, it should be okay.

Yes, I think it might be better to create a new project in the long term. There have been times when end users have reported outages which have led to them being assigned and fixed by other phabricator users (e.g. disk failure issues, OAuth troubles etc) - so allowing users to add some critical things here is also a benefit.

Chippyy added a comment to T121345: [Wikimaps Warper] Edit tab is not available for maps uploaded by other users.

okay It appears to be fixed. Closing again. Thanks

Chippyy added a comment to T73257: Make Map warper be recognized as a connected app.

The new OAuth consumer registration has been approved, so it should be all be working now. Will close this issue if others can log in again. Many thanks!

I've set up http://graphite.wmflabs.org/dashboard/#maps_warper1 which may be the kind of persistent monitoring we are after - so but now we'd just need some alerts if possible.

Okay, I'm assuming that the /mnt filesystem is gone, not actually needed and not important.

Yes there does appear to be errors.

marking as resolved as removing old kernel and unused packages and unused locales freed up space on the one partition thats working.

I tried re-adding labs::lvm::srv but nothing happened, even after a reboot. Should i open a ticket for that? However as my comment on the blocking task T112641 says, I have freed up 1.5G of space by removing kernels, unused packages etc. I think we can mark this particular one as closed now.

I removed old kernels and uninstalled emacs and installed localepurge to remove unused locales and that freed up a whopping 1.5G so the urgency for free space has diminished. However the filesystem still is not mounting.

Chippyy added a comment to T99583: Place labels are clippy.

Firstly, congrats on the beta launch. Via twitter @mxfh directed my attention to: https://maps.wikimedia.org/#16/40.7121/-74.0072 Manhattan Tribeca and Southbridge Tower labels are also clipped. 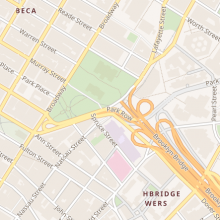 So the ultimate reason for this was that there was no space left and was complicated by the NFS situation with this instance's project coming back online recently. I've freed up a few more megabytes but it will fill out.

I can handle this, and am the admin for the maps-warper project

could be related to https://phabricator.wikimedia.org/T98602 ?