User does not belong to any projects.

Removing myself, I'm no longer involved
In fact this may have been resolved, I'm not sure. I certainly engaged with Dschungelfan

Mar 18 2020, 6:22 PM · Analytics-Radar, Analytics-Wikistats
Erik_Zachte placed T180118: X-axis is at odds with stated period in header of trend charts for 'total articles' for a wiki up for grabs.

removing myself, I'm no longer involved

@Nuria, thanks for the link. I will look at more depth to the task lists later this weekend.

I started a page on Wikistats 1 on https://meta.wikimedia.org/wiki/User:Erik_Zachte/Wikistats%201. Other than earlier overview pages for Wikistats this one is focused on where do we stand with Wikistats 1 now, in the light of the migration to Wikistats 2. What in Wikistats 1 still works? (several crucial data streams). What has been disabled ? (some of it prematurely I would say). What is not inside the scope of earlier surveys, but would be a pity if it got lost all-together (some of the Viz's). I give credits to new developments, but also make some critical remarks at the end.

@elukey thanks for continuing a constructive dialogue.

@Nuria are you saying a fix that might take an hour, if not less, is not done, because another issue might popup in the future? It's not that you're committing for eternity to uphold Wikistats 1. Maintaining the perl scripts has never been expected, I've always been open about these being maintenance unfriendly.

We are leaning towards turning these jobs off because they've been broken for almost a year and nobody has complained so far.

It seems I added @Error inadvertently. Is that a bot? Or a playful nickname?

So I looked first into the cron processes that are still enabled on home/ezachte. There are two.

@elukey Hi! I'll get to this in coming days. Thanks for your patience.

I have just reapplied for server access with John Bond
I was supposed to add the new public key myself at https://phabricator.wikimedia.org/T215790, but I can't even view that ticket as Erik_Zachte (ezachte).
Once I'm back online I will review the folders mentioned here, and comment.

@Milimetric thanks for bringing this to completion

@Yair_rand you examples show ingenuity, yet they also seem somewhat contrived. Suppose some malicious geeky and rather obsessed user would go to such length to 'exploit a weakness' in the privacy protection, and they learn about the country of a wikimedian who doesn't want to reveal themselves, how much damage could be done? Say China, with its enormous resources finds out that 16 active editors on a small wiki all edit from Taiwan. How much would they have learned then? Taiwan has 23+ million population. That geeky detective could probably also learn from text analysis (English isn't spoken the same in different countries), from analysis of edit times (where waking hours is a proxy for time zone), from edits being spaced wider apart from countries with low bandwidth. I admit all contrived examples as well, and only effective in combination, and in the hands of a very geeky and obsessed malicious user with infinite resources. It's probably easier for such a geek to infiltrate our security by social engineering, placing a mole, and what have you.

Erik_Zachte added a comment to T222655: Formalize the concept of countable wikis.

IIRC the criterion was rather which wikis to exclude explicitly. Those were wikis which are not publicly editable or nor even readable. Example that comes to mind is the board wiki.

Ah, sorry I mixed up two tasks then. Just copied my comments to https://phabricator.wikimedia.org/T182960

For the record, I'm copying from a mail exchange with @Milimetric :

For the record, I'm copying from a mail exchange with @Milimetric :

My preference would be the second option: Just when a color is lighter than #999999 add a thin black outline.
But using lighter colors all over would help as well.

No, I'm fine with second bullet point, I just meant to say 'there is too much happening when I click the radiobutton'. But subdivide on the chosen metric makes sense.

Reports with new announcement are being generated. The English Wikipedia dump is still being parsed so I will update reports again later this week.

https://wikitech.wikimedia.org/wiki/Analytics/Systems/Wikistats briefly mentions the data lake and edits, but 90% of the page is about pageviews and traffic. Those are different data streams (no relation with dumps), different reports.

Yes I can update the text tomorrow.

I see recent R charts again! It was an elusive bug, hard to replicate.

@mpopov Thanks, I totally rely on Andrew for this, I don't have root access, which is fine to me, so I can't mess up ;-) And server migrations are rare anyway.

@fdans WiViVi doesn't use a threshold because the aggregation level is that high that individuals don't stand out from the crowd, except for fringe cases (and even then ... how serious is that ?)
WiViVi reports monthly request counts, broken down by originating country and target wiki.
Yes one person can account for all page requests for a very small wiki from a very small country (fringe case).
I have been working on the premise this is not a privacy hazard.

script stat1005:/home/ezachte/wikistats/dumps/bash/collect_edits.sh has been adapted to stat1005

Hmm, I could migrate all of Wikistats to stat1004 (prefer to keep all one machine, also charts are part of overall Wikistats job.
Is stat1004 machine equivalent to stat1005?
Does 'still Jessie' imply that stat1004 will be upgraded at some point and the same issue will reoccur?

script stat1005:/home/ezachte/wikistats/dumps/bash/extract_dump.sh has been adapted to stat1005

Erik_Zachte added a comment to T180118: X-axis is at odds with stated period in header of trend charts for 'total articles' for a wiki.

That looks odd, indeed, also for other languages.

Yes the basic principle has changed a bit, albeit longer ago, start 2017.

Another comparison between Wikistats 1 and 2: this time edit counts per user.
I compared edit counts for users with 5000+ edits on af.wikipedia.org, namespace 0.

I collected feedback in https://phabricator.wikimedia.org/T178591 (I don't know how to link it here as a subtask, I never did such)

There is page_is_redirect_latest, I imagine it could be very useful to also have a field to which page id or page title the redirect goes. For example for combining pageview counts. Not that Wikistats 1 has such, but still..

Question: with deleted revisions still somewhere in the database, as column revision_is_deleted suggests: should these be shielded from the public once this database is opened for public access? 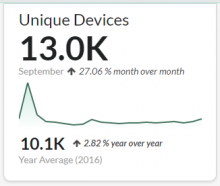 No nitpicking this time. An y-axis that doesn't start at zero, in combination with no numbers along the y-axis makes it anybody's guess what the chart tells. And most people will guess wrong.
Oct 12 2017, 4:58 PM · Patch-For-Review, Analytics-Kanban, Analytics-Wikistats
Erik_Zachte added a comment to T178084: Alpha release: Wikistats 2 UI feedback From Erik Z.

On some places I see K/M/B for thousand/million/billion.
On other places k/m/b. Maybe make a general formatting routine for this (preferedly language sensitive).

I made a few more edits last night.

bash file datamaps_views.sh has been migrated to stat1005, so monthly updates to WiViVi can now be generated

ad-blocker uBlock blocks WiViVI (with 3 reports on this from a small audience, this better be solved before we publish the blog post)

@ezachte @mforns @Nuria What do you think about the following change in the dashboard?

Data have been relayed to Tony Sep 7.
Thanks @Aklapper for quick response.

Please do. Tomorrow any time till 12 AM PDT works for me. Preferably a bit earlier.

Totally agree, non zero based y-axis doesn't give a sense of scale, and can make any slight breeze be misinterpreted as a hurricane.
I never understood why Tufte was so keen on these, and being applauded for it, where he often calls for being unambiguous.
Area coloring on chart with one line look nice to me.

Ah I forgot to close this task. Scripts are running again.

@Nuria Ah I missed these. Sorry about that. A good example of why restructuring my mailbox was dearly needed, so I finally fine-tuned Gmail filters this weekend. So I could start vetting later this week. Shall we do a hangout?

Erik_Zachte added a comment to T175493: collect banner impressions for WLM2017 and see if counts are lower than expected.

Introduction:
Not knowing of P4040 I first ran code to count image impressions of the thumbnail in the banner.
Later when Leila pointed to P4040 I ran those queries (again for test case South Korea) and compared with my thumb counts: they matched quite well.

As for data that Wikistats can supply: (2/2)

As for data that Wikistats can supply: (1/2)

After a long outage (partly caused by unexpected server migration) I revived Wikistats scripts and parsed dumps in the last 10 days. So I can partially answer the question.

that's fine with me, thanks
right now I am updating all Wikistats scripts to make them more uniform, better organized, a bit more documented, with better logging, with better backups
in preparation for productification, which may require further updates, but at least all scripts will then be more intelligible (for me as well)
I'll make a note to bring this up again end of calendar year

Aug 7 2017, 9:10 AM · Research-Archive, Epic, Data-release
Erik_Zachte added a comment to T144607: Visualization of Wikimedia traffic by language, country and region.

Hyvä Suomi! Most readers for any Wikipedia per capita, if I read correctly. It would have been nice to confirm by reading in the table, but the numbers displayed in the table were different from what was displayed in the choropleth map.
(me: Great point, thanks. I need to look into that.)