Magioladitis added a comment to T294770: Remove "empty section" tag from sections that are not empty (AWB).

And another problem is that some sections contain only templates. They can be either empty or not.

The problem is that in many cases we have noticed single characters vandalism within a section.

As far as I remember this problem was not only connected to AWB but it was more general. Even when I was searching for the Turkish letter, I was getting the Latin "I" too.

Magioladitis updated subscribers of T228604: Clean up party of Mediawiki:Common.css at Wikimania 2019.

I can do the Greek part along with @geraki

Magioladitis added a comment to T193506: Image requested tag moved to the wrong place in the automatic edits.

If you fix the tags to match the {{WikiProject...}} format everything will work fine...

Cat was a dupe 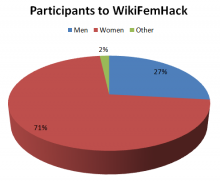 4 blog posts in Greek can be found here:
http://magioladitis.blogspot.gr/search/label/WikiFemHack

The event showcased Gender Gap, focused on finding the roots of this phenomenon and ways to mitigate it. Among others, our main goal was to welcome women, inform them and increase their participation in technology, programming and in Wikipedia.
The event had two constituents. In the first room there were talks from Greek and international researchers about Gender Gap in Wikipedia and also community projects like Wikimedia, thesswiki, etc. At the same time, in the second room an editathon on Greek Wikipedia and a Hackathon took place. The attendees had continuous support from Wikimedia Foundation programmers and volunteers.
WikiFemHack aimed at designers, scientists, educators, students and graduate and PhD students with no or a lot of experience in similar projects. Our aim was to inform and exchange views and opinions so we could, through conversation, take a step towards mitigating the Gender Gap in Technology.
Everyone that attended had the chance to learn about the rules and code behind Wikipedia and the rest of the Wikimedia Foundation projects, enrich the Greek Wikipedia with content and also show off their coding skills.

I ll add sime statistics asap. I am off home for an open source workshop in
Athens: :)

Magioladitis added a comment to T155865: Adding/Changing DEFAULTSORT because of standard English letters..

We have removed all this logic fro AWB. Did they change something in
Mediawiki?

Magioladitis closed T100614: [Migrated] Option to turn off re-ordering of references as Resolved.

Magioladitis added a comment to T154089: Removal of ref reordering in AWB.

Recall that awb is not used only in en.wp

Magioladitis added a comment to T154089: Removal of ref reordering in AWB.

Moreover, AWB is used by other Wikipedias too. The RFC is only about en.wp.

Magioladitis added a comment to T141346: MOS HEAD and AWB.

This is now considered as one of the things AWB should stop doing in En.wp

Magioladitis added a comment to T152256: AWB ignores included orphan template and includes second one into the same article.

Magioladitis added a comment to T152111: Move break tags out of wikilinks.

@Bgwhite what do you think?

Be careful of isbn10 parameter

@Rjwilmsi This one may not be worth to add. Unless we already have a logic for a single = sign. Otherwise, I found only 1 example.

I think "Sky 77" without slash is better.

I can't think of any scenario where nowiki would be needed. @Bgwhite

@Zebulon84 As a workaround chnage

@Zebulon84 Yes, because general fixes happen only in mainspace. As a workaround you can remove quotes from the group.

It's not fixed. Bug confirmed.

It's already fixed in the next release. Please check