Message appears for existing newcomers who had the Impact module and had visited their homepage before.

This patch appears to have fixed the issue. Thanks for the ping @kostajh

Marking as unbreak now, presumably lots of clients (including maybe apps) are relying on these feeds.

Maybe @daniel or @hnowlan have some ideas?

The featured content feed and picture of the day https://api.wikimedia.org/feed/v1/wikipedia/en/featured/2022/11/15 don't work either.

That seems reasonable to me. Cc @Samwalton9

FWIW, here's how I set up ORES data locally:

Thu, Dec 1, 1:41 PM · PageTriage, Growth-Team
kostajh added a comment to T324157: Display ORES in Special:NewPagesFeed even if not installed (for testing).

One way to do that would be to have a static provider for ApiPageTriageList. That's quite useful for e.g. Selenium tests in CI as well.

There will need to be an update to https://en.wikipedia.org/wiki/MediaWiki:PageTriageExternalTagsOptions.js after the patch is merged and goes to production. {F35657097}

Seen on the rest.php endpoint on testwiki, as well as when running the maintenance script. 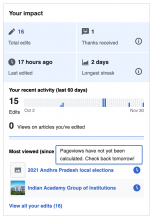 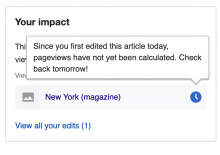 On Special:Impact, at least, the ?new-impact=1 query seems to work:

Although, it's not really that useful for testing the clock change, because we export static data instead of allowing it to be dynamically generated. Let me see about changing that.

On Special:Impact, at least, the ?new-impact=1 query seems to work: 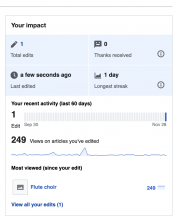 Another example - Time edited seconds ago immediately displays large number of pageviews (because it displays 60 days worth of data), but the sparkline doesn't reflect the actual fluctuations during that time interval.

The only case when delayed stats (the clock icon) will be displayed is when a user edits "local" article (i.e. Mavetuna articles in the screenshot below). 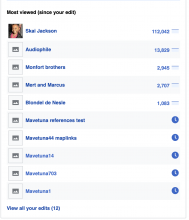 In the current production, the pageviews won't be immediately available 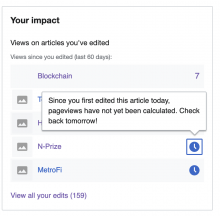 The numbers won't match between the number of pageviews displayed in the Impact module and pageviews stats. end=latest doesn't include the current date.

Support! Thank you for all of your work in reviewing and contributing patches to PageTriage, @Novem_Linguae!

Hopefully this is the right place to ask. I am not an English native speaker, so while I can sometimes get technical terms, I don't necessarily get the nuances and context, and history of the words. Hopefully you can give me some advice:

I want to create a quick tool to do some debugging for a Wikipedia-related service. It is important to name the tool to make sure it is identified, not as a proper solution, but as a quick alternative to test a bug. I've heard in the past the expression "poor man's X", for example for Linux one-liners that substitute a proper built tool. However, that doesn't sound to me as very inclusive. The obvious change, "poor person's X" also doesn't look right to me. Can you suggest alternatives that don't refer the gender or economic level of a person, but still convey the quickly put together nature of it? Please apologies if I am making already a mistake while asking.

@Sgs - is the following spec will be implemented in another task?

Thanks Received count - with link to Special:Log?type=thanks filtered by the user

Checked in betalabs - five articles plus two articles with yet uncounted pageviews are displayed correctly - the scope of this task seem to be done: 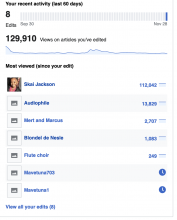 However, two issues discussed in the comments - should they be resolved before deployment?
Added as a comment to T323253 (1) the pageviews for just made edits will be displayed immediately
The current behavior in betalabs:

In the current production, the pageviews won't be immediately available

I would be inclined to keep it, but better document:

Moving back to ready for development per Elena's QA. Might make sense to do T323748: UserImpact: Adjust time zone correction for page view URLs alongside this one as well.

I'd say the answer is "it depends".

Declining per discussion on patch. Please re-open if you'd like to discuss this more.

I'd start with maybe a single method (addToPageTriageQueue seems like as good as place as any) and think about introducing classes for:

@LGoto this has API Platform sign off (via Bill's comment above).
@DAbad good to advance with the Extension solution? Not sure who from SRE needs to approve.

Maybe we can do both?

Thanks. What does owning that risk mean, exactly?

In general, it means that the decision to put d3js into production in this fashion (prior to any security review) is a decision completely owned by your team and @DMburugu. Including any potential negative consequences.

Based on https://office.wikimedia.org/wiki/Security/Policy/Risk_Management, are we now supposed to create a risk treatment plan? (And if so, what should that contain -- are there examples?)

That's definitely the best practice - to create a risk mitigation plan. Though for situations like this that doesn't always make sense. Theoretically, the risk mitigation plan would be having a security review performed and mitigating any resultant risk prior to deployment. But given timelines and resource constraints that isn't really an option in this case, and so a default medium risk has been applied and accepted.

I think the last item here is what @RHo commented on in T313274#8424377; one should be able to tab to the clock icon, and it should also open a tooltip with the explanatory text.

Thanks @sbassett. If I understand correctly, that means we are OK to go ahead with using d3.js in production as early as November 28th. (Realistically, it is more likely to be December 5 when we start putting this in front of users.)

Yes, with the understanding that your team and @DMburugu own the medium risk for that deployment,

Hi again, @kostajh or @Sgs - this is maybe minor regression but I've noticed that the new impact module's clock icon has the message in a browser tooltip on hover, and is not keyboard accessible. It should appear and behave in the same way as before, which is a pop-over info text that is shown either on hover or via keyboard select:

Should I file a ticket or can it be resolved as part of this task?

Hmm, agreed that it is changed behavior from the old impact module. From an accessibility standpoint, I wonder if the behavior in the new impact module (the title attribute on the icon) is better, since it doesn't require the non-sighted user to tab into an interface to read the message?

I think it may be worse since it is skipped entirely in keyboard navigation, so think it makes sense to go back to the original interaction.

Bringing over another accessibility issue noticed by @RHo

I found this in the backlog T313176: Impact module: Top viewed articles counts is using unexpected count logic which is related to this task.
We should prioritise T313176 because currently the numbers are misleading and confusing if counts are based on since one's last edit on any article, and not connected to last edit on the specific article.

I see it, thanks a lot. The tests are not failing with the earlier identified error anymore.

Ideally Zuul would report immediately when it knows that a change is not going to pass. As you found out that is T248531 which probably should be declined given I don't want to make any change to the legacy forked Zuul code were are using.

you can watch Zuul, but most people don't know to do that

That is indeed a problem. Lot do have the Zuul status page opened and would watch that as CI is progressing.

For a quicker feedback there is T214068 which is to expose in the Gerrit interface the status of the change in Zuul. OpenDev did something like that and showed progress but I never went to integrate it in our interface. I did some work on that front over the last few days, firstly to reformat the Zuul reported messages, then an attempt to integrate the ongoing progress in the UI ( https://gerrit.wikimedia.org/r/859127 ): 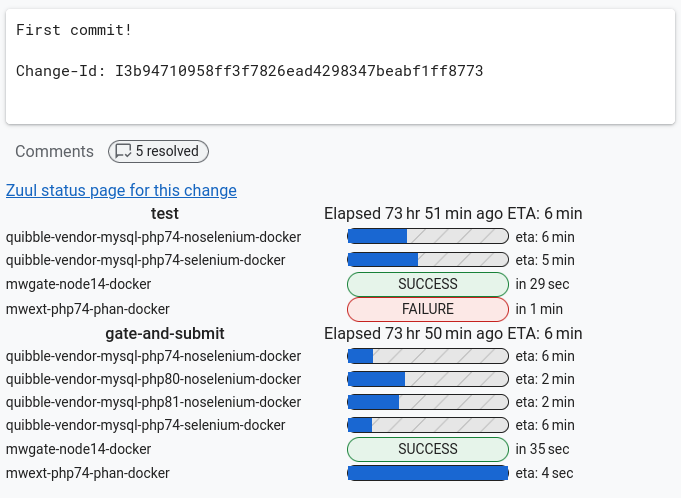 I have two or three changes on that front but none I am pleased with. Eventually Gerrit has an API / UI to expose CI results: https://gerrit.wikimedia.org/r/Documentation/pg-plugin-checks-api.html and I have started porting code to it. The intent is to expose: 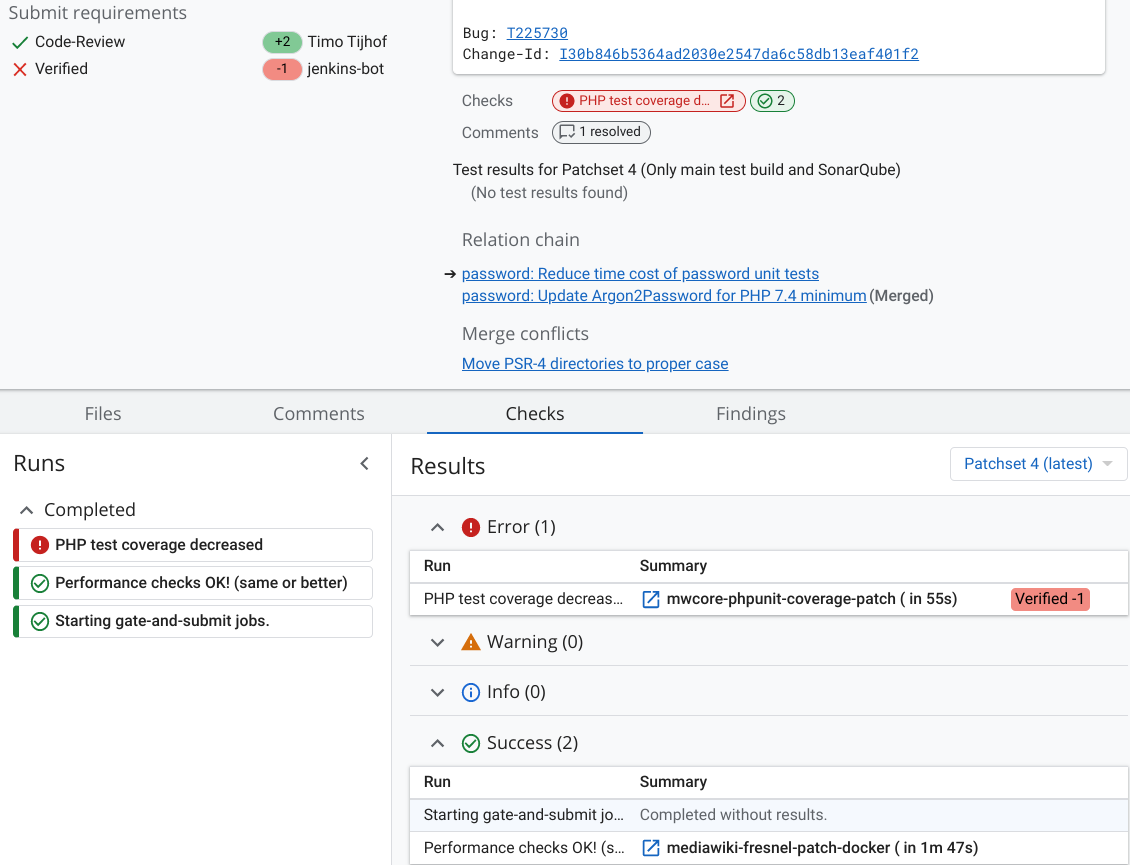 When a job fails and is voting, I guess we can make Gerrit to notify the user via the Web UI. I don't know the JavaScript API needed to do that though but there must be one since Gerrit is able to notify when a new patchset has been uploaded.

then the behavior is like in Chrome or Firefox (see attachement). Could it be this in your tests as well?

You can still call it "Hooks.php", indeed the "main" HookHandler for PageTriage currently points to that file:

The main point of this task is to introduce and highlight to existing users that their impact module has changed, so I don't agree with showing it the second time it is seen, it really should be the first time view.

kostajh added a comment to T323478: NewImpact: graph does not show the dips and peaks that correspond to the page views.