This post shows how we measure and interpret load times on Wikipedia. It also explains what real-user metrics are, and how percentiles work.

When a browser loads a page, the page can include program code (JavaScript). This program will run inside the browser, alongside the page. This makes it possible for a page to become dynamic (more than static text and images). When you search on Wikipedia.org, the suggestions that appear are made with JavaScript.

Browsers allow JavaScript to access some internal systems. One such system is Navigation Timing, which tracks how long each step takes. For example:

Where to measure: Real-user and synthetic

There are two ways to measure performance: Real user monitoring, and synthetic testing. Both play an important role in understanding performance, and in detecting changes.

Synthetic testing can give high confidence in change detection. To detect changes, we use an automated mechanism to continually load a page and extract a result (eg. load time). When there is a difference between results, it likely means that our website changed. This assumes other factors remained constant in the test environment. Factors such as network latency, operating system, browser version, and so on.

This is good for understanding relative change. But synthetic testing does not measure the performance as perceived by users. For that, we need to collect measurements from the user’s browser.

Our JavaScript code reads the measurements from Navigation Timing, and sends them back to Wikipedia.org. This is real-user monitoring.

How to measure: Percentiles

When working on a service used by millions, we focus on the 99th percentile and the highest value (100th percentile). Using medians, or percentiles lower than 99%, would exclude many users. A problem with 1% of requests is a serious problem. To understand why, it is important to understand that, 1% of requests does not mean 1% of page views, or even 1% of users.

A typical Wikipedia pageview makes 20 requests to the server (1 document, 3 stylesheets, 4 scripts, 12 images). A typical user views 3 pages during their session (on average).

The previous section focussed on performance as measured inside our servers. These measurements start when our servers receive a request, and end once we have sent a response. This is back-end performance. In this context, our servers are the back-end, and the user’s device is the front-end.

It takes time for the request to travel from the user’s device to our systems (through cellular or WiFi radio waves, and through wires.) It also takes time for our response to travel back over similar networks to the user’s device. Once there, it takes even more time for the device’s operating system and browser to process and display the information. Measuring this is part of front-end performance.

Even when we make no changes, the front-end measurements do change. Possible causes:

The most likely cause for a sudden change in metrics is ourselves. Given our scale, the above factors usually change only for a small number of users at once. Or the change might happen slowly.

Yet, sometimes these external factors do cause a sudden change in metrics.

Shortly after Apple released iOS 9 (in 2015), our global measurements were higher than before. We found this was due to Mobile Safari 9 introducing support for Navigation Timing.

Before this event, our metrics only represented mobile users on Android. With iOS 9, our data increased its scope to include Mobile Safari.

iOS 9, or the networks of iOS 9 users, were not significantly faster or slower than Android’s. The iOS upgrade affected our metrics because we now include an extra 15% of users – those on Mobile Safari.

The above graphs plot the "75th percentile" of responseStart for desktop and mobile (from November 2015). We combine these metrics into one data point for each minute. The above graphs show data for one month. There is only enough space on the screen to have each point represent 3 hours. This works by taking the mean average of the per-minute values within each 3 hour block. While this provides a rough impression, this graph does not show the 75th percentile for November 2015. The next section explains why.

Below is an example with values from three minutes of time. Each value is the response time for one request. Within each minute, the values sort from low to high. 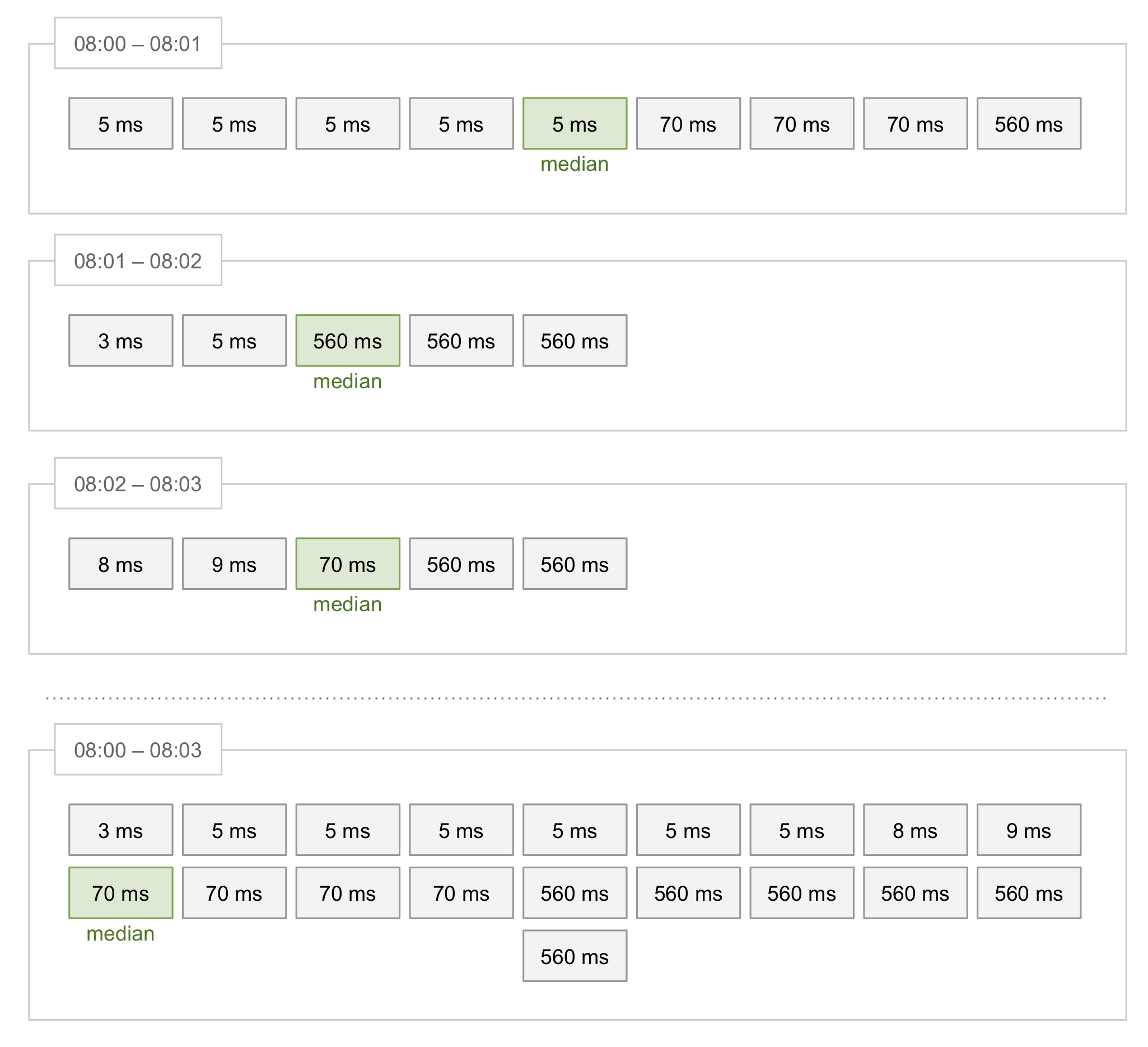 To compute the percentile over a large period, we must have all original values. But, it’s not efficient to store data about every visit to Wikipedia for a long time. We could not quickly compute percentiles either.

A different way of summarising data is by using buckets. We can create one bucket for each range of values. Then, when we process a time value, we only increment the counter for that bucket. When using a bucket in this way, it is also called a histogram bin.

Let’s process the same example values as before, but this time using buckets. 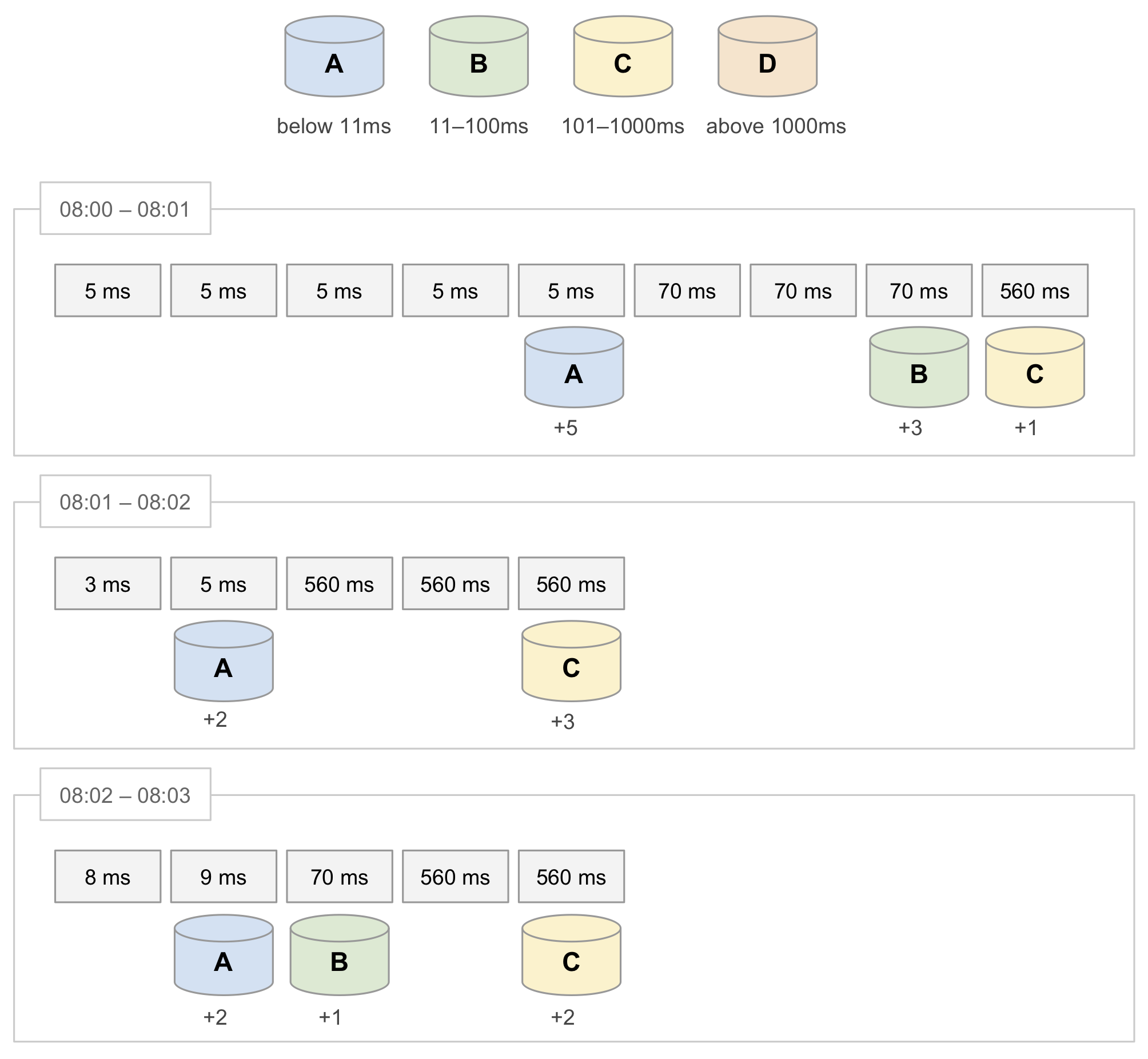 We cannot know the exact millisecond value of the median, but we know the median must be between 11ms and 100ms. (This matches our previous calculation, which produced 70ms.)

Traffic trends are generally moving towards mobile. In fact, April 2017 was the first month where Wikimedia mobile pageviews reached 50% of all Wikimedia pageviews. And after June 2017, mobile traffic has stayed above 50%.

Global changes like this have a big impact on our measurements. This is the kind of change that drives us to rethink how we measure performance, and (more importantly) what we monitor.

Nice to know! But in your opinion, basing from these datas, which part in the current Wikimedia do you think has the most pinpointed issues when it comes to load times?

@sr229 Synthetic testing and real-user metrics, each, pinpoint different issues. In my opinion, you need both. The below table is simplified (not completely accurate), but might help:

Synthetic testing can detect both small and big changes, and with high confidence (e.g. as small as 10ms or 50ms difference), because we know the previous and current results came from exact same scenario. This finds issues that are invisible in RUM data.

On the other hand, we cannot test all possible combinations of internet connections, devices, browsers, different pages on the site, different geo location, etc. So synthetic testing only reveals issues that affect everybody, or that specifically affect our scenarios.

Real-user metrics pinpoints all other issues. But, real-user metrics are not consistent, because users never do exactly the same thing twice. For that reason, changes in RUM data only pinpoint issues if the change is big or if it persists over a longer time (e.g. multiple days or weeks)