One of the first presentation at the conference - Building a testing culture at Pinterest by Jennifer Uviña - provided details of their success story (and some mistakes that were made) improving the impact of QA team on delivering quality products. Jennifer described the whole experience as a process of going through three stages - Struggling- → Established- → Strong. At the Struggling stage Checklist for change was proposed and, as it turned out, it was extremely helpful. Their checklist had only three points:

One of the specific pieces of advice - there don't need to be 10 mln tests - less is more in terms of tests, since every test has its cost in terms of maintenance.

Establishing a testing culture that is impactful on delivering a quality product is not only about team processes. In the end, the ultimate question always is - how exactly to do testing? And immediately the next question - "Do we need to have manual testing at all"? There were three presentations that addressed exactly that - Manual testing is not dead...just the definition, Whole team holistic quality, and Contemporary Exploratory Testing. Every of these presentation resulted in chat exploded - I did not see before that any of the other topics (either on July or March conferences) had so many comments, shared thoughts, and, well, just emotional responses. In a sense, reading the chat was as illuminating as listening to those three absolutely superb presentations.

Manual testing is not dead...just the definition by Erika Chestnut presentation started with describing an elephant in the room - "The rise of test automation has reduced the manual testers' footprint significantly. We have more and more AI and ML tools that are taking on things like visual regression and providing smart test automation. [...] So where does that leave manual testing? " Erika showed how manual testing, as an integrated engineering process, is still essential for the product quality. With a smart term "Humanual testing", Erika stated that "you cannot have an impactful testing without HUMAN. Manual testers speak language of the customers."

The comments from chat were in full agreement with the presentation topic and they were insightful on what value manual testing adds:

So, when in the next presentation - Whole team holistic quality by Alexandra Schladebeck, the question "Do we still need testers?" had a Jean-Luc Picard facepalm picture, the chat applauded. 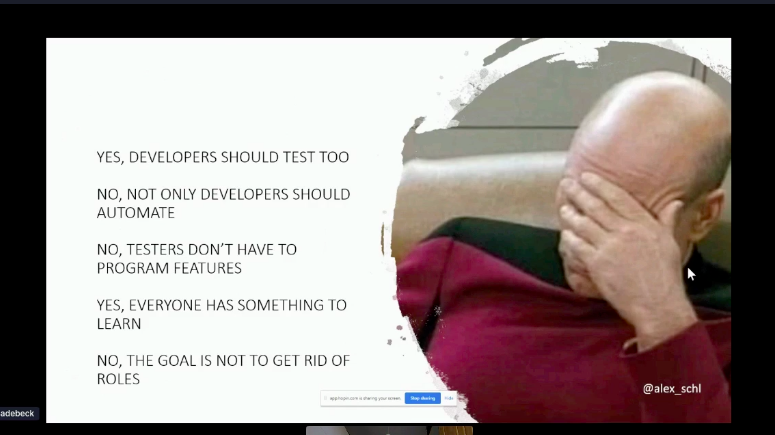 Two other presentations - Contemporary Exploratory Testing by Maaret Pyhäjärvi and Agile Tester Toolkit by Julia Pottinger - were focusing on redefining what exploratory testing includes and on having right tools for exploratory testing. As Maaret pointed out "Contemporary exploratory testing raises from the observation in teams that we too often do a bad job at both manual testing and test automation for the outcomes we seek in projects. What does it look like when we frame the two together, through an example of an application, of testing done and automation created?" When we look at the agile development process today, the previous QA practices, such as writing tons of tests, obviously are not applicable anymore. What is not fully realized, however, is that having tons of automated tests are not the answer either. Maaret listed several traps that usually were attributed to manual testing, but the automation testing, if the approach to testing is incorrect, would have exactly the same shortcomings as manual testing.

With a well-known saying "You can't automate well without exploring. You can't explore without automation", the presentation described how to scope exploratory testing correctly by differentiating at what level the exploratory testing is done - a user story level, a feature, and even a software architecture level.

Agile Tester Toolkit presentation by Julia Pottinger had detailed guidance on how to bring together the intelligence of exploratory testing and efficiency of automated testing by building a tester toolkit. As the first step, a simple visualization might help to see what skills a QA engineer has and what would be great to have: 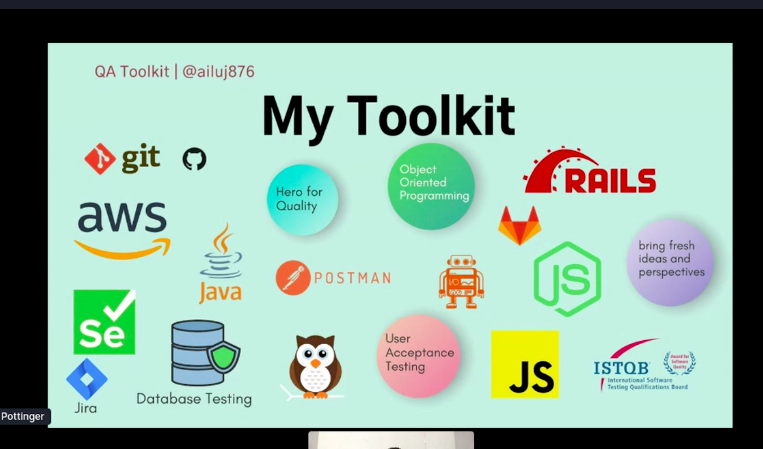 However, the most interesting to me was the visualization of the process to achieve the goals:

The point #3 "Dedicate time to learn" sounds as one of the most important to me.

To conclude - it was great to see shared understanding of the role of exploratory testing in QA process, it was inspiring to get insightful tips of creating better QA practices, and it was fun to share in chat mutual enthusiasm for better testing. Happy testing, everyone!