There are instances when browsing Wikimedia sites on Android or iOS where, at the start of a line, the first two or three characters of a line in some context pertaining to Wikidata (whether within an entry from a user's contributions list or the start of a Wikidata item description on another wiki) appear in a decomposed form. This seems to affect Indic scripts more generally but not, for example, Arabic (another language where the composition of characters is imperative). This also does not appear to occur on other sites with Indic text, such as online newspapers and blogs.

The attached iOS screenshot (on my iPad running iOS 11.3 with the latest version of Firefox, which uses Safari's rendering engine) shows this occurring in Aftabuzzaman's contributions list, as highlighted. 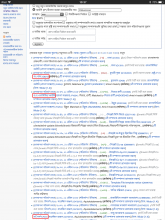 The attached Android screenshot (on my Android 7.0 phone running rebranded Firefox, which does not use Chrome's rendering engine) shows this occurring on an article in the Bengali Wikipedia, as highlighted.

@Mahir256: Please always provide links that allow someone else to reproduce the problem. Thanks!