Bug: Flow Preview is displaying both the preview and the editing box
Closed, ResolvedPublic
Actions

On Mediawiki: Preview is displaying both the preview and the editing box. This makes the "Keep editing" button a baffling concept, because you can keep editing where you are. We should hide the editing box again.

PS. I know that Quiddity and Hhhippo have suggested that we actually show both the preview and the editing box -- it's not a bad idea, and we can talk about adding that later, maybe with a "Refresh the preview" button. But breaking something and then moving stuff around the breakage isn't a great development plan. :) Let's fix the bug and then talk about the change. 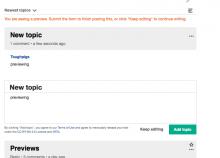 quiddity listed this under features :)

Change 180978 had a related patch set uploaded (by Mattflaschen):
Hide inputs on preview

Change 180979 had a related patch set uploaded (by Mattflaschen):
Hide inputs on preview

• Mattflaschen-WMF added a commit: rEFLW1d045731023e: Hide inputs on preview.Dec 18 2014, 10:42 PM
• Mattflaschen-WMF added a commit: rEFLWc085bcd7ed6c: Hide inputs on preview.
• Spage added a project: Collaboration-Team-Triage.Dec 18 2014, 11:56 PM
RandomDSdevel awarded a token.Mar 2 2015, 10:19 PM
Diffusion added a commit: rMEXTb3cd5a6b119a: Updated mediawiki/extensions Project: mediawiki/extensions/Flow….Mar 11 2015, 4:38 AM
DannyH moved this task from Ready for next sprint to Resolved on the Collaboration-Team-Triage board.Apr 1 2015, 7:30 PM
matthiasmullie added a commit: rEFLWa43abe2c87cd: Hide inputs on preview.Apr 28 2016, 2:40 AM
Log In to Comment
Content licensed under Creative Commons Attribution-ShareAlike 3.0 (CC-BY-SA) unless otherwise noted; code licensed under GNU General Public License (GPL) or other open source licenses. By using this site, you agree to the Terms of Use, Privacy Policy, and Code of Conduct. · Wikimedia Foundation · Privacy Policy · Code of Conduct · Terms of Use · Disclaimer · CC-BY-SA · GPL