Both Leon and Niharika have reported problems with using LoginNotify with MediaWiki Vagrant + Echo role. Figure out why it's causing errors and how to address those (and make sure they aren't problems that will occur in production). This may be due to the fact that LoginNotify interfaces with CentralAuth in mutli-wiki environments (and the code that interfaces with CentralAuth may be out of date).

I figured out that the missing piece for getting it to work both locally and on commtech wiki was a composer update. The strange bit is I did run vagrant git-update for both which I am pretty certain does a composer update. Anyway, doing it manually fixed the problem. Now it does work for me. We should create a vagrant role for LoginNotify to avoid this problem for anyone who wants to contribute to the extension.

Also, I found a bug. If I do failed attempts to login to an account twice, it issues me two notifications: 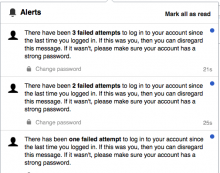 I've filed tickets for both: T162103: Create a vagrant role for installing LoginNotify with vagrant and T162104: Fix multiple/repetitive notifications with LoginNotify