Assigned To
None
Authored By
Tags
Referenced Files
Subscribers
View All 11 Subscribers
Tokens
"Like" token, awarded by Aklapper.

There are no indent on first reply, and not on any later replies either, which makes it seem like all replies goes on the last except if you disagree on a previous post. You can then digress on the last reply without it ever showing up in the reply structure. This is confusing.

The full list of feedbacks can be found on w:no:Wikipedia:Torget#Flow (permalink) 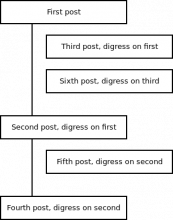 This is the existing indentation model. Only clear digress, that is clicking on a previous rely, is now indented. Note that the third post now is placed higher on the board than the second one. 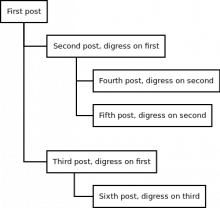 This is the wanted indentation model. All replies to the first post will now be indented. Note that the third post now is placed lower on the board than the second one.

An other important distinction is that the last layout more clearly follows "who do I reply to" and not "who do I digress with", which makes it more obvious why there is a single reply field.

This is almost certainly a duplicate, I've been complaining about this (although less articulately) for a while :(

I found some duplicates, I merged them here since I think your report is better written.

I also found T105438: Move indentation model to rendering which describes a potential solution to this.