We got a nice change the 24th for the Facebook page we test with Firefox: 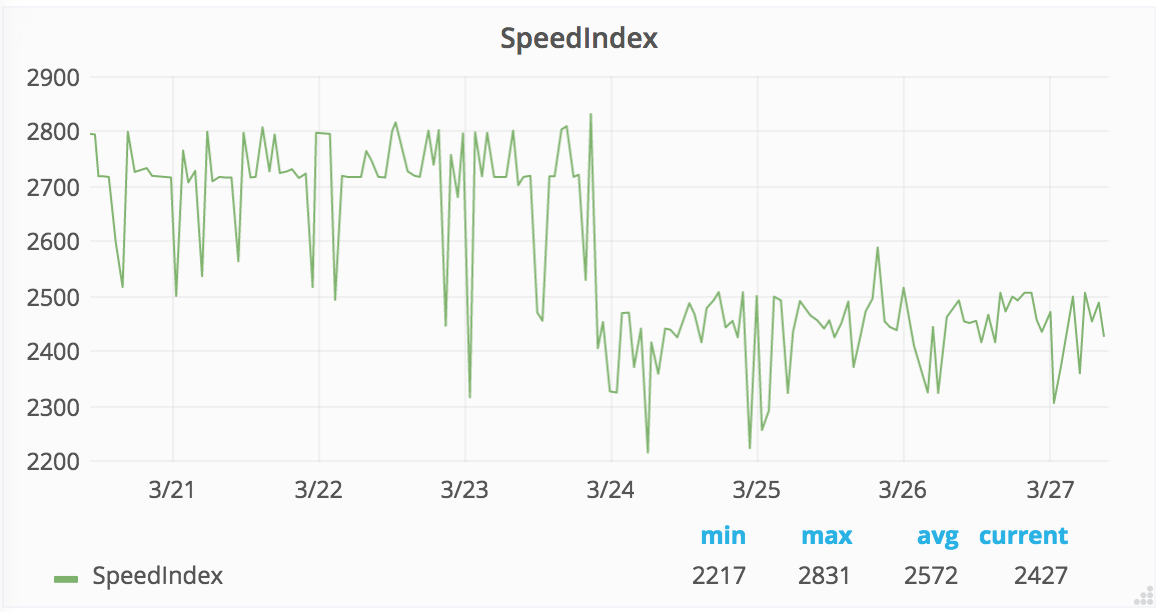 All metrics are better for that page: 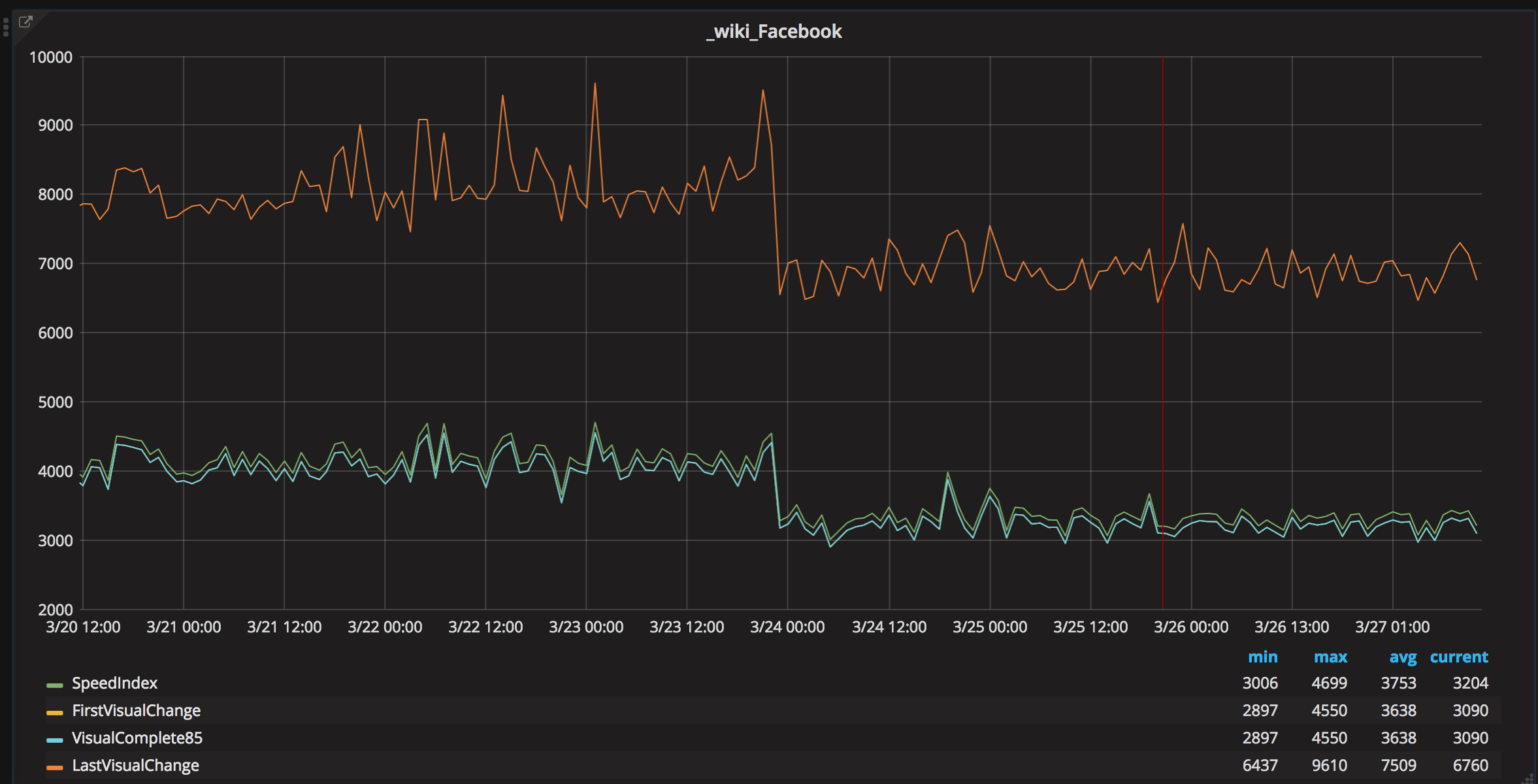 But nothing for the other two pages we test. We should investigate to see what made the decrease in metrics. 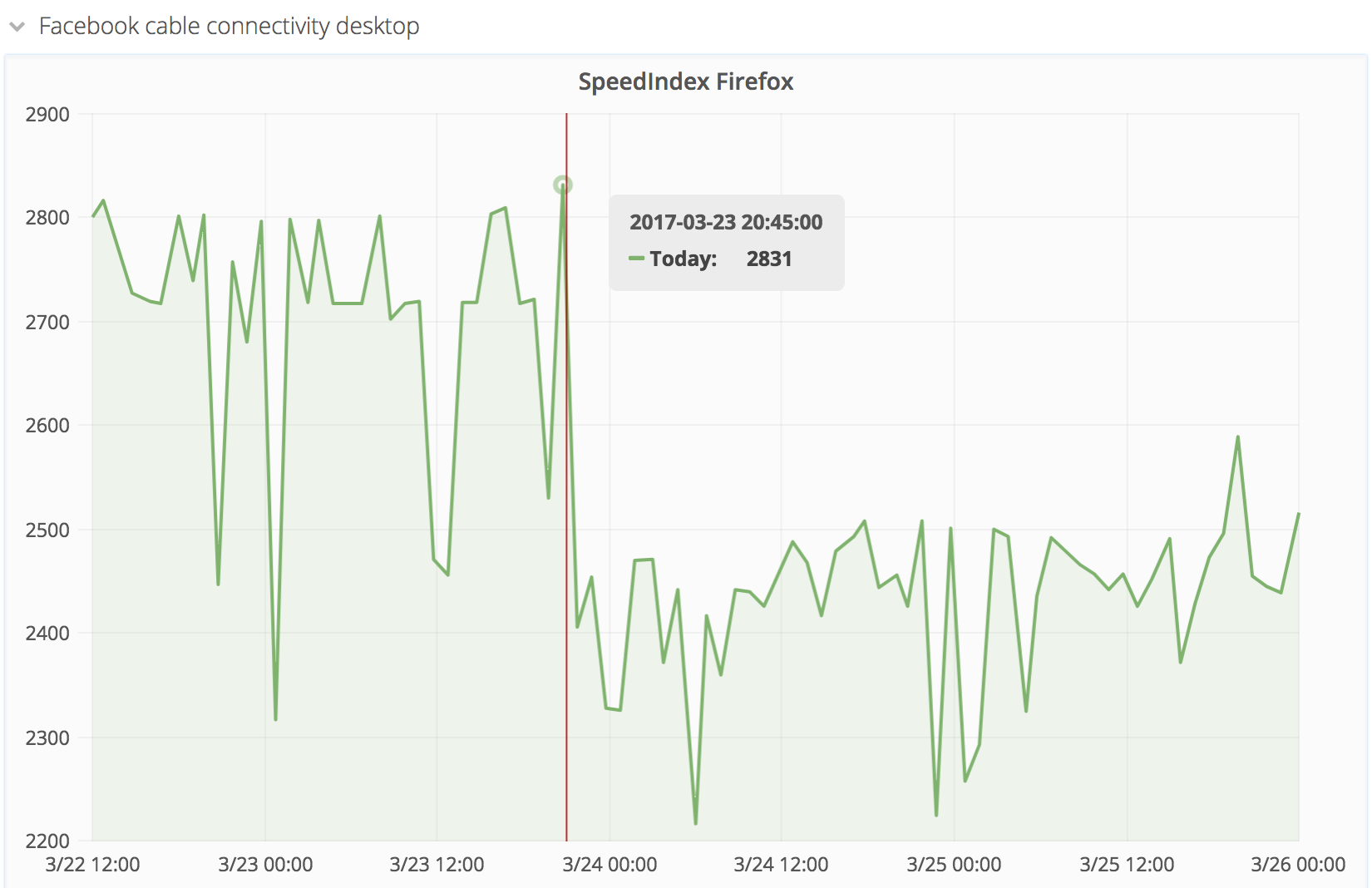 Seems like the obvious trigger is the roll out of this weeks' MediaWiki changes (1.29.0-wmf.17). Looking through the commits in MediaWiki core (not looking at the extensions yet), the following stand out in terms of frontend behaviour that may have changed for plain page views.

Next step: Compare waterfall collected by WebPageTest from runs before/after the change.

PS: Navigation Timing from around the same time does not seem to have significantly changed so it might be specific to Firefox or certain aspects of this run (Facebook page, English Wikipedia, cable speed, geolocation). (See https://grafana.wikimedia.org/dashboard/db/navigation-timing?from=1489795200000&to=1490572800000, switch between the various metrics).

Runs before the change alternate between SpeedIndex 2500 and 2800 on the graph. A few samples:

Runs after the change alternate between SpeedIndex 2200 and 2500 on the graph. A few samples:

The removed request was done in rMW2fccd229d2e8: Skin: Preload jquery.tablesorter based on rough heuristics (part of T159911: Audit modules (2017)). I tried hard to find some other difference but this seems to be the only thing that stands out.

However none of this explains why it affected earlier metrics like "Start Render". Browsers don't have to wait for document ready (domInteractive) or window load (domComplete) to start painting something.

On the other side, the request that was removed used to start around 1.9s, and start render at 2.3s. So it certainly is "in time" to have been used as a heuristic of some sort in Firefox internally. While Firefox definitely doesn't wait for domComplete to render, it might be that it more-or-less arbitrarily decides to wait a small amount of time for certain requests to complete in case they significantly change the page (to avoid FOUC). It looks like it was doing that for our tablesorter request which Firefox may've seen as "important" for some reason.